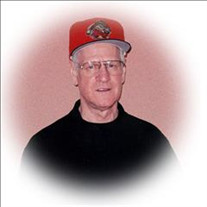 Walter Ralph Hudson, of Odessa, TX, passed away Friday, Sept 10, 2021, at Medical Center Hospital. He was 86 years old. He was born January 29, 1935, in Kansas, to Ralph & Velma Hudson. After graduating from Southwestern Bible College in Waxahachie, TX, Walter worked for the Pratt, KS newspaper. Then he served his country in the US Air Force. His most memorable service was his time at Indian Mountain Air Force Station, which was a remote radar surveillance station in Alaska. After his military service, he managed many Western Union locations across Arkansas, New Mexico, & Texas. Then he began working in the oil & gas industry. He worked for Cardinal Chemical & Haliburton, then for BJ Services for 21 years, retiring in 1997. After Walter retired, he began his hobby of creating documents on his computer, sending out hundreds of mailings each month. He sent hundreds of birthday & anniversary cards, etc, each year, & over 300 Christmas cards annually, including personal notes in many of them. For years, he organized the Williams Family Reunion, & sent out several letters & reminders to all the family members. Walter & Thelma were always together, & volunteered for many different organizations. After Walter survived cancer, they spent several years volunteering for the American Cancer Society. Because Alzheimer's had devastated several family members, they facilitated the Alzheimer's Association support group meetings for many years. They were very active members in their church, Bethel Assembly of God. They had a ministry of outreach & visitation for over 23 years, often spending 5 or 6 days each week, visiting local hospitals & nursing homes. They both had clergy badges for Medical Center Hospital for many years. They were avid fans of the Odessa Jackalopes & worked as ticket takers for the team for the past 21 years. They also worked during many other events at the Ector County Coliseum. Walter's favorite times were those spent with his family, & all the times he spent traveling, especially going camping. During the past 45 years, they've always had an RV. He was a member of the Good Sam RV Club, & the local Oil City Sams chapter. All their kids had their own campers, & they traveled together on many trips. Anytime he went on a camping adventure, he was like a kid! He always made sure to take more than enough firewood, so he could build his famous campfires, which were known to many, as huge bonfires! Walter married Thelma Williams on January 25, 1959, in Monahans, TX. They were married for 62 years. He was a loving husband, Dad, & Grandpa, who adored his family. He served God with all his heart, & we know he's in Heaven, with all our loved ones who have gone before us. Walter was the last survivor, of 7 siblings. He was preceded in death by his parents, Ralph & Velma Hudson, his brothers, Wilbur Hudson & Richard Hudson, his sisters, Lois McCullough, Rose Dryden, Evelyn Daugherty, & Mildred Hudson, his son-in-law, Allen Wayne Brashier, & his treasured furbaby, Peanut. Left to cherish his memory are his wife of 62 years, Thelma Hudson, of Odessa, son & daughter-in-law, Les & Sandy Hudson, of Ruidoso, NM, son & daughter-in-law, Lyndel & Traci Hudson, of Odessa, & daughter, Lori Hudson Brashier, of Odessa. Also surviving are his granddaughter & grandson-in-law, Brook & Morgan Belknap, & great grandchildren, Addison & Sadie, all of Odessa, TX. He is also survived by many nieces & nephews, & several in-laws. Officiating his service will be Pastor Paul Thompson, Rev. Roger D. Mattox, & Rev. George Baley. Pallbearers will be Les Hudson, Roy Bean, Morgan Belknap, Jimmy Moody, David Parker, & Chad Williams. Honorary pallbearers will be Rev. George Baley, Billy Bradley, Mike Parker, Jack Westerfeldt, & Ronnie Wynne. Visitation will be on Monday, Sept 20, 2021, from 5pm - 8pm at American Heritage Funeral Home. Funeral service & burial with full Military Honors are scheduled for Tuesday, Sept 21, 2021, at 10am at American Heritage Funeral Home & Cemetery, located at 4100 N. FM 1788, Midland, TX. Condolences may be posted at www.thehealingstartshere.com

The family of Walter Ralph Hudson created this Life Tributes page to make it easy to share your memories.

Send flowers to the Hudson family.