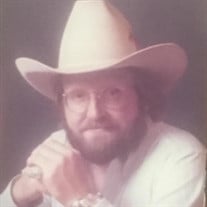 Steven Napper was born July 4, 1948 in Lamesa, Texas to Lee Roy and Oletha Napper. He passed from this life on May 24, 2020 after a long illness. The Napper family moved from Lamesa to Odessa in 1949. Steve attended school in Odessa and graduated from Permian High School in 1966 where he was a member of the marching band. He was also actively involved in the Boy Scouts throughout his school years and was awarded the level of Eagle Scout. He spent many week ends and summers at Buffalo Trail Scout Ranch. He was a member of the Order of the Arrow where he served as Chief of the Tatanka lodge. In 1964 he was selected to attend the Boy Scout World Jamboree in Norway. After graduation, Steve began attending West Texas State in Canyon (now West Texas A & M). He went on to to earn Bachelor degrees in Art and Secondary Education and Master degrees in Psychology and School Administration. In 1967 Steve and 3 other friends formed and organized the Kwahadi Heritage Foundation. Steve continued to serve on the Board of Trustees throughout his life. The Kwahadi Indian Dance team has continued to perform throughout the United States and abroad. Eventually the Kwahadi Museum of the American Indian was built in Amarillo where Steve painted several murals and where numerous paintings are displayed showcasing Steve’s artwork. After graduating college, Steve starting teaching art at Carver Learning Center in Amarillo. He always believed that art was a way for troubled children and young adults to express themselves, and he was able to relate to and help many young people. He was also Vice Principal at Travis Middle school and Palo Duro High School. He eventually moved to California where he worked as a Professional Scout in Whittier, California for several years. After teaching and a career in Scouting, Steve decided that he wanted to devote his life to his art. God blessed Steve with the ability to bring life to the canvas. He eventually had studios in Amarillo and Georgetown. He eventually moved to Ingram and opened his last studio in the beautiful Hill Country of Texas. He also taught many art workshops throughout the country and participated in many art shows. He continued his devotion to the Indian culture, Frontiersmen, and to the people of his beloved Texas by chronicling them in his paintings.During his career he has been recognized with both awards and memberships in many of the most prestigious art organizations in America. These include: Pastel Society of America, American Portrait Society, National Western Artist, American Plains Artists, Salmagundi Club, Rocky Mountain Plein Air Painters, and the Texas Wild Bunch. Examples of his artistry have been published in such major publications as Pastel Society of America and Southwest Art. About 10 years ago Steve decided to move back to Odessa due to some health problems. He resided with his sister, Teresa, and before long a 12x18 ft. Toughshed in her backyard was converted into his studio. It was there that he spent many hours just having time to himself, painting, working on bead work for different Indian projects, listening to CD’s, and doing computer work. Steve leaves behind his sister, Teresa Cates, nieces Christi Cates and Cari Cates, and many extended family and friends. We would like to thank Dr. Borra and Texas Oncology, Star Hospice, and all of those who contributed to his care. Steve had a very full life. None of the awards and accomplishments given to him throughout his life can compare to the friendships he made along the way. Some of the comments his family has heard the last few weeks include: He was a great teacher, he was a great counselor, he was my best friend, he helped me to become the person I am today, he was such a great influence on my life. It is these things that he would want to be remembered for. A memorial service will be held on Saturday, June 6, 2020, at 2:00pm at American Heritage Funeral Home and Cemetery, 4100 FM 1788, Midland, TX. A second memorial will held in Amarillo, TX, with the date to be announced at a later time. In lieu of flowers we would ask that you consider a donation in Steve’s name to the: Kwahadi Museum of the American Indian P. O. Box 32125 Amarillo, TX 79120 All contributions are tax deductible

Steven Napper was born July 4, 1948 in Lamesa, Texas to Lee Roy and Oletha Napper. He passed from this life on May 24, 2020 after a long illness. The Napper family moved from Lamesa to Odessa in 1949. Steve attended school in Odessa and graduated... View Obituary & Service Information

The family of Steven Roy Napper created this Life Tributes page to make it easy to share your memories.

Send flowers to the Napper family.