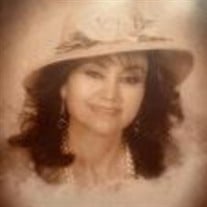 Silvia Roman, 52, of Odessa, TX passed away on December 21, 2020 at Medical Center Hospital in Odessa, Texas. Silvia was born on December 28, 1967 to Simon and Angelita Galindo in Ojinaga, Chihuahua, Mexico. She is survived by her partner... View Obituary & Service Information

The family of Silvia Roman created this Life Tributes page to make it easy to share your memories.

Send flowers to the Roman family.