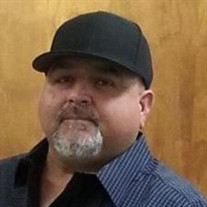 Roy Marquez Galindo, 53, of Odessa, TX passed away on January 04, 2021 at Medical Center Hospital in Odessa, Texas. Roy was born on May 12, 1967 to Reynaldo and Natividad (Flores) Natividad in Odessa, Texas. Roy was hard working who took care of others, but his family was his priority. He had the ability to make anyone laugh regardless of the kind of day they may have been having. He adored his grandbabies and would do anything for them. He had the biggest heart and loved to dance! He was always available when anyone needed him. He loved his mama dearly, calling her daily to make sure she well. He referred to his sister as his best friend saying she was more like a brother than a sister! He was the man of a million jokes! He is survived by three children, Tabitha Olivan (Ricardo) of Odessa, TX, Reynaldo Galindo (Brianna) of Odessa, TX, and Miranda Galindo of Odessa, TX; three granddaughters, Adalise Olivan, Aubrielle Olivan, and Giana Olivan; his mother, Natividad Galindo of Odessa, TX; one sister, Belinda Galindo of Odessa, TX whom he said was his best friend and more like a brother to him!; and his niece, Kimberly Anaya (Rocky), nephew Joe Ray Galindo (Ruby) of Odessa, TX, niece Monica Galindo, nephew Aiden Rey Galindo, and nephew Xavian Galindo. He is preceded in death by his father, Reynaldo Galindo Sr. and one brother, Reynaldo Galindo Jr. Visitation will be held on Thursday, January 7, 2021 beginning at 10:00 AM and a Rosary the same day beginning at 7:00 PM, all at American Heritage Funeral Home in Midland, TX. Funeral services will be on Friday, January 8th, 2021 at 10:00 AM in the American Heritage Funeral Home Chapel with Augustine Martinez officiating. Burial will take place at American Heritage Cemetery.

The family of Roy Marquez Galindo created this Life Tributes page to make it easy to share your memories.

Roy Marquez Galindo, 53, of Odessa, TX passed away on January...

Send flowers to the Galindo family.