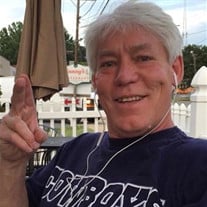 Gene was a PROUD Chief Engineer at Hilton Garden Inn in Falls Church, VA. His fellow employees were his second family, not just coworkers. He was an all-around handyman. He loved his family and the Dallas Cowboys. He had an infectious smile... View Obituary & Service Information

The family of Michael Lee "Eugene" Walker created this Life Tributes page to make it easy to share your memories.

Gene was a PROUD Chief Engineer at Hilton Garden Inn in Falls...

Send flowers to the Walker family.