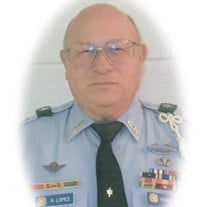 Rev. Luis Raymundo Lopez was born on September 22, 1945 in Managua, Nicaragua. Ray passed away on March 16, 2020, at the age of 74 in Midland, Texas where he lived since 1992. Ray was born in Nicaragua to Enrique Lopez, and at the age of 10 years old came to America with his oldest brother Inocente Trinidad Lariosa. “Larry” raised Ray and was like a father to him and the rest of his family that immigrated together to America. Larry’s entire family served in the United States Air Force, and Ray was raised as an American Military child. Ray Lopez was drafted and later enlisted into the United States Army where he worked his way through the ranks while serving in the Vietnam War to the rank of Captain. Captain Lopez was part of the Special Forces in the Green Berets and became a highly decorated Jump Master / Paratrooper, receiving three Purple Hearts, one Silver Star, four Bronze Stars, Cross of Gallantry, and an Air Medal, among other awards and commendations. After his Military service, he returned to El Paso, Texas and was stationed at Fort Bliss, where he previously had married Emilia Victoria Soto-Lopez on January 20th, 1970. Together they had three boys, Luis Raymundo Lopez Jr, Richard Paul Lopez, and Robert Michael Lopez. Ray Lopez Jr married Samantha Sowell and had 2 children; Cole Lopez and Amber Lopez. Paul Lopez married Katie LaBonne and they have 2 children; Ashley Lopez and Kaylee Lopez. Michael Lopez married Elizabeth Bessire. Captain Lopez is survived by his extended family; Larry Lariosa, Margarita Soto, Jose Soto, Linda Lujan, Mauri Lariosa, Marinita Lariosa, Pio Lariosa, Cecilia Lariosa, Conchita Rodriguez, Chendita Vallecillo, Sukie Soto, Lupe Soto, Noni Soto, Marsha Armstrong, Ignacio Yanez Jr, Cathy Yanez, Dylan Soto, Catalina Ataydo Ignacio Yanez Sr., Nena Yanez, and Karen Yanez. Throughout his life he poured his heart into continuing to serve other veterans of all eras. It is impossible to count the number of lives Ray Lopez touched over his years dedicated to his service as Chaplain of the Odessa VFW Post 4372 in the Permian Basin. Captain Lopez helped lay to rest countless veterans, leading the Honor Guard at funerals and memorial services. He assisted grieving families by delivering a dignified farewell to those who made the ultimate sacrifice. His respect for others, as well as his personal touch to each service led many to receiving the Lord’s message of hope and salvation amidst deep grief. Captain Lopez was a man of purpose, and he will be deeply missed by all who knew and loved him. A visitation will be held on Thursday, March 19, from 4:00 pm to 8:00 pm at American Heritage Funeral Home in Midland, Texas. A funeral will be held on Friday, March 20, at 3:00 pm at American Heritage Funeral Home with burial immediately following at American Heritage Cemetery. Because of the current COVID-19 pandemic, services are limited to the public, and will be livestreaming. Please check back here for more information on Captain Lopez’s services. Arrangements by American Heritage Cemetery Funeral Home Crematory. PLEASE RSVP FOR FAMILY VISITATION AND VIEWING: https://www.eventbrite.com/e/cpt-luis-raymundo-lopez-visitation-rsvp-tickets-100311502404

The family of Captain Luis Raymundo Lopez created this Life Tributes page to make it easy to share your memories.

Send flowers to the Lopez family.