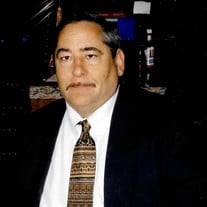 Louis Dwayne Felkins, age 61 of Odessa, TX passed peacefully on Friday, October 1, 2021 at Medical Center Hospital in Odessa, Texas. Louis was born on April 11, 1960 to Louis and Polly (Clarke) Felkins in Ponce, Puerto Rico. Louis has had many successful careers in his lifetime, owning several businesses over the years including Lone Star Recovery and Felkins Mobile Home Park. He has been an over the road chemical transport CDL Driver, a roustabout, an Oilfield Safety Inspector, an Outside Sales Representative, a Staffing Consultant, and a professional Handyman to name a few. He served on the Oil Show Board and as a member of the Chuck Wagon Gang. As well as supporting his daughter by building and tearing down many sets for the Permian Playhouse and The Globe Theatre. Louis was married to Iretta Pruit from 1983 to 2003; he then married Vicki Denise Felkins on April 10, 2009. Louis is survived by three daughters, Amber Nicole (Felkins) Gray, Patricia Villanueva (Bolton, and Misty Bolton; nine grandchildren, Alisha Ochoa, Brady Bolton, Coby Hernendez, X’Andrea Garza, Rainey Hernandez, Matthew Garza, Amileah Gray, Anthony Hernandez, and Madilyn Gray; eight great grandchildren; his father Louis Felkins; and four siblings Barbara Felkins, Mary Dye, Clifford Felkins, and Carol Hoyt. He is preceded in death by wife Denise Felkins; his mother, Polly (Clarke ) Felkins; and one brother David Felkins. A Memorial Service will be held on Thursday, October 7th, 2021 at 11:00AM at Connection Christian Church with Dawn Weaks officiating.

The family of Louis Dwayne Felkins created this Life Tributes page to make it easy to share your memories.

Send flowers to the Felkins family.