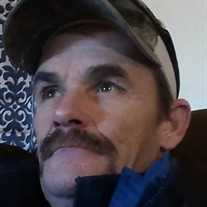 Kevin Lee Digby was born in Odessa, Texas, on July 31, 1971, to Janet Nixon Sullins, and was blessed with a loving dad, Gordon Walker Sullins. Kevin was called home on September 7, 2019 after a lengthy battle with liver cancer. He was waiting on a transplant, but it wasn't meant to be. He was a proud American and pipeliner. He spent 30 years traveling around the country building pipelines as an operator and bending engineer. He was preceded in death by his mother and father, grandparents Mabley Cockrell and James Nixon; aunts, Linda Henderson and Brenda Nixon; and uncle Bobby Baker. His baby daughter, Allison, or "Sissy", as we call her, was his best friend. When he was having a bad day or feeling really bad, she could make him laugh. This was a heavy burden for a 15/16 year old, but she did it with love, joy, and compassion - and aggravation. Kevin is survived by his grandfather, Jack W. Cockrell and wife, Wanda; sons, Kaleb Digby of Big Spring and Chandler Hubbard of Colorado; daughters, Taylor Kelly and husband Brent of Big Spring, Maggie Vogle of Wyoming, and Allison Gabrielle Digby of Colorado; sisters, Jamie Overby and husband Kelly of Odessa, and Heather Hall and husband John of Odessa; granddaughters, Paxton Kelly and Nova Digby; and grandson, Kenya Digby; as well as several nieces, nephews and great friends. Pallbearers for the service are: Chandler Hubbard, Aaron Hall, Ethan Hall, Sammy Carrasco, Ira Caraway, Bobby Baker Jr., John Hall, and Kelly Overby. A viewing will be held on Tuesday, September 10, from 5-8pm at American Heritage Funeral Home. A funeral service will be held at 1pm on Wednesday, September 11, at American Heritage Funeral Home in Midland, followed by burial at American Heritage Cemetery. Zachary Hall is officiating. Arrangements provided by American Heritage Cemetery | Funeral Home | Crematory.

Kevin Lee Digby was born in Odessa, Texas, on July 31, 1971, to Janet Nixon Sullins, and was blessed with a loving dad, Gordon Walker Sullins. Kevin was called home on September 7, 2019 after a lengthy battle with liver cancer. He was waiting... View Obituary & Service Information

The family of Kevin Lee Digby created this Life Tributes page to make it easy to share your memories.

Send flowers to the Digby family.