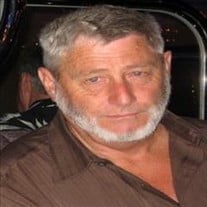 Find Facebook Livestreams here: https://bit.ly/ahFacebook Find YouTube Livestreams here: https://bit.ly/ahYouTube James "Walter" Owen Jr. (PawPaw), 76, of Midland, TX passed away on February 17, 2021 at Midland Memorial Hospital in Midland, Texas. Walter was born on September 16, 1944 to J.W. and Gladys Marie (Johnson) Owen in Lewisville, Arkansas. He married Sharon Sue (Walls) on January 27, 1984. Walter loved God, his family and his country. He was a devoted husband, father, grandfather and great-grandfather. Family was everything to him. He was a veteran of the US Air Force having served in Vietnam. He was an avid outdoorsman, and his passion was deer hunting. Walter was a true Texan through and through and had a heart as big as Texas. He never met a stranger and would go out of his way to help anyone in need. A true John Wayne fan, you could always find Walter on Sunday afternoon watching John Wayne movies. We would like to think that Walter is galloping across the plains in Heaven with John Wayne saying, "you see those phone lines over there, I put those there." He is survived by his spouse Sharon Sue Owen of Midland, TX; three children, Randy Owen, Tracy Binion (Chris), and Sarah Carey (Josh) of Midland, TX; six grandchildren, Chase, Haley, Michael, Amanda, RJ, and Nathan; three siblings, Arnold Ray Owen (Garleen), Mary Bunch, and Sherry Patterson; and his Great granddaughter, Dallas, Great granddaughter Kyah, Great grandson Elijah, and Great grandson on the way, Little Man. He is preceded in death by his parents, J.W. and Gladys Marie Owen and one brother, Roy Lee Owen. A Celebration of Life will be held on Tuesday, February 23, 2021, 2:00 PM at American Heritage Cemetery Funeral Home Crematory.

The family of James "Walter" Owen Jr. created this Life Tributes page to make it easy to share your memories.

Send flowers to the Owen family.