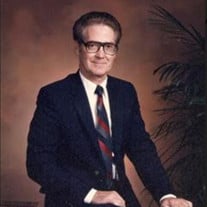 James Robert "Bob" Jackson passed of natural causes at the age of 91 on March 22, 2021 at his longtime home in Midland, Texas. A memorial will be held graveside at Resthaven Memorial Park, 4616 N Big Spring St, in Midland on April 3, 2021 at 11 AM. Bob was born in Temple, Texas on December 19, 1929, to George Emory Jackson and Evelyn Estrem Orbeck. He was baptized on January 26, 1930 at Trinity Lutheran Church in Clifton, Texas. He was raised in Blum and Clifton. After graduation from Clifton High School in 1947, he was living in Fort Worth when he met his future wife, Betty Ruth Hutchins, a nursing student. They were married January 21, 1952. He received the Bachelor of Arts degree with a major in geology from Texas Tech University on August 27, 1954. Bob had a long career working as a geologist for Texaco in Midland. He was an independent spirit who loathed formality and had a sense of adventure and love of the outdoors. He especially enjoyed camping and backpacking in the Davis Mountains, Big Bend, and New Mexico. He attended the first Terlingua Chili Cookoff in 1967, and he was a pioneer in running the canyons of the Rio Grande in the Big Bend using rubber rafts. In the 1970's he traveled extensively in Mexico, driving a Volkswagen bus and using cans of Budweiser to barter with the locals. At one point he drove so far into the Tarahumara territory in the Sierra Madre mountains that he was unable to find a way back out until he chanced upon an Irish anthropologist. He was an expert auto mechanic and at one time had a large collection of vintage Volkswagens. He competed nationally in cycling. Bob was a born bon vivant and would strike up a conversation with anyone, often imprinting upon them a touch of his own tireless lust for life. He was preceded in death by his parents, his wife Betty Ruth Hutchins Jackson, daughter Jamie Beth Jackson Clifton, and sister Linda Marie Jackson Bryan. Bob is survived by his brother, Dr. Morris Kent Jackson and family of Nacogdoches, daughter Julie Anne Jackson Underriner and husband Phil Muth of Wimberley, son Dr. George Robert Jackson and Ken Totas of Houston, grandsons David, John, Lyle, and George Clifton, as well as John's wife Rachel and great grandson Jack; step grandson Jacob Clifton; granddaughter Emily Underriner Legault, her husband Bryan, and great grandchildren Lydia and Luke; grandson Dr. Chaz Underriner and his wife Martha, and grandson Keith Underriner and his fianc�e Mandy McGuire. The family would like to thank the caring providers at Hospice Midland and Home Instead for their efforts. In addition, we are grateful to Bob's longtime caregiver, Teresa Taylor, for her patience and perseverance.

James Robert "Bob" Jackson passed of natural causes at the age of 91 on March 22, 2021 at his longtime home in Midland, Texas. A memorial will be held graveside at Resthaven Memorial Park, 4616 N Big Spring St, in Midland on April 3, 2021... View Obituary & Service Information

The family of James Robert Jackson created this Life Tributes page to make it easy to share your memories.

Send flowers to the Jackson family.