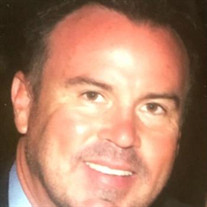 Howard "Brent" Floyd saw the face of Jesus on the morning of Friday, August 24, 2018 after a valiant battle with cancer. Brent leaves behind a legacy of faith, love, loyalty, humor and courage. Brent is survived by his wife of 21 years, Tiffany, his three kids (Jakob, Dylan and Ava), his mother Linda Floyd of Brownfield, Texas and countless aunts, uncles and cousins. He is also survived by his in-laws, Mike and Judy Galbraith in Midland and brother-in-law Joe Galbraith, his wife Michelle and nephew Ben in Austin. Brent is preceded in death by his father, Howard Floyd and his grandparents Howard Edwin and Lucille Floyd of Seagraves and Lonnie and Iva Taylor of Brownfield. Brent was born on December 17, 1970 in Odessa,Texas to Howard and Linda Floyd. Brent grew up in Iraan, Texas and graduated from Iraan High School. Brent attended Texas Tech University where he met Tiffany. Brent moved to Midland in 1999 and was the President at Cactus Sign Company. If you were to ask Brent how he would define his life it would be faith and family, and those who knew him would wholeheartedly agree. His family was his passion. Brent was also a fiercely loyal friend to others. In fact, most of his friends considered themselves his "best" friend and once you were friends then you were friends for life. Brent had the gift of humor and his ability to make others laugh brought people together. His humor was never at the expense of others but as an expression of his love for Jesus and joy for life. Brent also had a talent for music and he loved to play the guitar. He imparted that joy and talent of music to his kids. Some of his favorite times were spent in a jam session with his boys and extended family. Brent had a heart for adventure and later in life developed a love for skiing, especially in Telluride, Colorado. Throughout his battle with cancer, Brent remained steadfast in his faith and faced the challenges associated with his illness with grace, courage and optimism. While, we can't always fully understand how God heals, Brent now knows the real meaning of healing in heaven. Tiffany and the family are truly grateful for the unwavering support and encouragement provided by their friends, extended family, their church family and the Midland community during his illness. Brent will be missed by so many family and friends, but no doubt he is making heaven laugh just as much as he made us all! A celebration of life service will be held at Midland Bible Church on Tuesday, August 28 at 2:00 p.m. located at 5900 Whitman Drive, Midland, Texas. In lieu of flowers, please send donations to the Head for the Cure at headforthecure.org (team: Brent Floyd) or InheritanceofHope.org.

Howard "Brent" Floyd saw the face of Jesus on the morning of Friday, August 24, 2018 after a valiant battle with cancer. Brent leaves behind a legacy of faith, love, loyalty, humor and courage. Brent is survived by his wife of 21 years, Tiffany,... View Obituary & Service Information

The family of Howard Brent Floyd created this Life Tributes page to make it easy to share your memories.

Howard &quot;Brent&quot; Floyd saw the face of Jesus on the morning of...

Send flowers to the Floyd family.