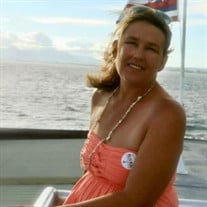 Heather Kay Hall, 50 of Odessa, TX was called home on April 30, 2021 at Covenant Medical Center in Lubbock, TX. Heather was born on May 27, 1970 to Gordon Walker Sullins and Janet Kay Nixon Sullins in Odessa, TX. She married John Daniel Hall on September 22, 1988, in Odessa, TX. Heather was a loving wife, mother, grandmother, sister, aunt, cousin, and friend. She had a special place in her heart for children, so much that she even adopted 3 after raising the children she already had. She had a niche for creating and designing tumbler cups. She was an amazing person and will be missed, but she is in a better place surrounded by amazing people. Left to cherish her memories are, her husband, John Daniel Hall; six children, Zachary and wife Leslie Hall, Katie and husband Roy Galloway, Ralli and husband Robert Reynolds, Aaron Hall, Ethan Hall, and Lillian Hall; four grandsons, Jayce Hall, Elijah Galloway, Kian Hall, and Ian Galloway; three sisters, Jamie and husband Kelly, Erin Wade, and Michaela Sullins; grandparents; Jack and Wanda Cockrell; and many wonderful nieces, nephews, brother-in-laws, sister-in-laws, and cousins. She is preceded in death by her father Gordon Walker Sullins; her mother, Janet Kay Sullins, and her brother, Kevin Digby. Visitation will be held on Thursday, May 6th, 2021 from 5:00PM - 8:00PM at American Heritage Funeral Home in Midland, TX. Funeral will be held on Thursday, May 7th, 2021 at 11:00AM in the American Heritage Funeral Home with Zachary Hall officiating. Burial will take place at American Heritage Cemetery.

The family of Heather Kay Hall created this Life Tributes page to make it easy to share your memories.

Send flowers to the Hall family.