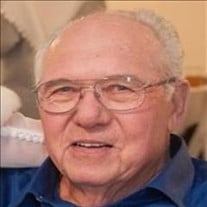 Gerald Dennis Laney, 80, of Midland, TX passed away on August 14, 2021 at Midland Memorial Hospital in Midland, Texas. Gerald Dennis Laney was born in Kilmichael, Mississippi, in 1940. After graduating from Big Black High School in Kilmichael, he joined the National Guard. Although not considered active-duty military, dad's division was commissioned by the US government, in 1962, to participate and ensure the safety of James Meredith, the first African American to attend the University of Mississippi (Ole Miss). Because of his duty and participation in this historical Civil Rights event, dad and the others in his division were federalized and awarded full veteran benefits for life. Dad married Evelyn Jeanette Overstreet in 1961. One of their first dates was while mom was babysitting her nieces. Dad would often say that he knew he wanted to marry her and that she would be a wonderful mother by the way she cared for her nieces. This proved true for us girls, Nandra, Michelle, Chasiti and Amanda. Dad started a career in the garment industry which lasted 20 years and covered 10 states and over 40 moves. The last move to Odessa in 1982, would begin his career in the oil industry. Buying and selling valves used by transport trucks and delivering them in the trunk of a '77 Cadillac, gave way to his first oilfield supply company, Transport & Tank and Factory Warehouse. Years later he began and is still 50% owner in Frac Tank Supply. Outside work, dad had many hobbies. Hunting and fishing, auctioneering, collecting guns and old cars and his true passion, flying. Dad loved to fly. He held many private pilot ratings including an instructors rating which he used to teach countless others. Dad loved kids and animals. He always said, "never trust a man that doesn't like a dog". He believed Jesus Christ to be Lord and Savior and raised us all to be believers. He was kind and generous and believed everyone deserved a chance. Sometimes 2 or 3! He dreamed of starting foundations to help people in need. He liked giving out money at Christmas to random people at Walmart and paying off lay- aways. Although our pain is overwhelming, knowing he and mom are together again and that neither one of them is hurting any longer, is comforting. As much as we wish he could have stayed, I guess God needed a good pilot. We love you dad. He is survived by five children, Nandra Dennis (Sam) of Hempstead, TX, Stephanie Laney (Mary Sanchez) of Midland, TX, Chasiti Baker (Bruce) of Midland, TX, Amanda Dickson (Steven) of Midland, TX, and Isreal Patino of Odessa, TX; nine grandchildren, Laney DeShelter (Craig), Madilyn Laney, Jacob Laney (Abrynna), Bryan Baker, Matthew Sanchez, Chicago Dickson, Providence Dickson, Mikalyn Fossett, and Sofia Patino; three siblings, Curtis Laney (Lilly), Sherry Thompson (Donald Ray), and Ginger Wolfe (Freddy); and his Great Grandson, Breon Laney, Great Granddaughter Mili Sanchez, Great Granddaughter Ella Sanchez, Great Grandson Ashton Sanchez, and Great Grandson Daniel Stowe. He is preceded in death by his wife, Evelyn Jeanette Laney; parents, Elizabeth (Campbell), J. W., and Elizabeth (Campbell) Laney. Visitation will be held on Thursday, August 26th, 2021 from 5:00 pm - 8:00 pm at American Heritage Funeral Home in Midland, TX. Funeral services will be on Friday, August 27th, 2021 at 1:00 PM at American Heritage Funeral Home with Talor Nunez officiating. Burial will take place at American Heritage Cemetery.

The family of Gerald Dennis Laney created this Life Tributes page to make it easy to share your memories.

Gerald Dennis Laney, 80, of Midland, TX passed away on August...

Send flowers to the Laney family.