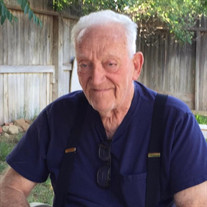 Donald Frank Thomson, 85, of Midland, TX went to his heavenly home on November 03, 2021 at Midland Medical Lodge in Midland, Texas. Donald was born on April 14, 1936 to Eli and Addie (Franks) Thomson in Midland, Texas. He married Lydia (Prado) "Babe" on March 18, 1990, in Las Vegas, NV. He never used her given name, only calling her "Babe", and told her often just how beautiful she was. Donald was a business man who owned and operated Thomson Van Lines for sixty plus years and was very successful at it. He cared for his employees and took care of them throughout the years. He was a devoted family man, an awesome Grandpa, and will be sorely missed by those who knew and loved him. He is survived by his wife Lydia ; five children, Samuel Thomson, Craig Thomson, Tammie Thomson, John Urias (Cynthia), and Christie Santos; six grandchildren, Frederick, Dominic, Zavier, Laila, Orlando, and Ryan; and three siblings, James Thomson, Ken Thomson, and Doris "Dolly" Thomson. He was greeted in heaven by two granddaughters, Vivian and Camille; his parents, Addie (Franks) and Eli Newland Thomson; and four siblings, Grace, Geneva, Betty, and Ernie. Visitation will be held on Wednesday, November 10, 2021 from 4-8 PM at American Heritage Funeral Home. Funeral services will be on Thursday, November 11th, 2021 at 11:00 AM at the American Heritage Funeral Home. Burial will take place at American Heritage Cemetery. Pallbearers are: John Dominic, Samuel Thomson, Frederick Garcia, Ken Thomson, Scott Thomson, John Urias, and Dominic Urias. A special thanks to Hospice of Midland. In lieu of florals, a memorial donation may be made to Hospice of Midland.

The family of Donald Frank Thomson created this Life Tributes page to make it easy to share your memories.

Donald Frank Thomson, 85, of Midland, TX went to his heavenly...

Send flowers to the Thomson family.