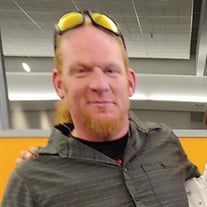 Anthony Eugene Slaughter, 45, passed away on June 24, 2020 in Midland, Texas. Anthony was born on June 27, 1974 to Hope Slaughter in Midland, Texas. Anthony graduated from Goldthwaite High School and joined the army in 1994, where he was stationed in Ansbach, Germany. He served with the 421st Multifunctional Medical Battalion as a Black Hawk Crew Chief. He did several tours in Bosnia, Somalia, and Rwanda. In garrison, he worked on Sikorsky UH-60 Black Hawks, and while in country he performed medical evacuations while also assisting the Red Cross with distributing aid to the locals. After leaving the army, he continued to serve his country as a civilian, teaching soldiers in Fort Hood how to survive in civilian combat zones. In 2009, he moved back to Midland to marry the love of his life, Lynda Slaughter. From 2009 until his passing, he became a "bonus dad" for Perrin Hatcher and Forrest Randall, and a grandfather to Alba Randall. In his free time, he enjoyed skateboarding, fire arms, paintball, art, music, collecting vintage toys, and spoiling Lynda. Those left to cherish his memory include his beloved wife, Lynda; his mother, Hope Slaughter; his two sons, Forrest and Perrin; one grandmother, and many aunts, uncles, cousins, and countless friends. He will be missed by all who knew him. A funeral service will be held on Wednesday, July 1st, 2020 at 11 a.m. at American Heritage Funeral Home in Midland. Arrangements by American Heritage Cemetery Funeral Home Crematory.

The family of Anthony Eugene Slaughter created this Life Tributes page to make it easy to share your memories.

Send flowers to the Slaughter family.