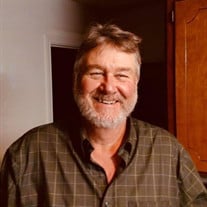 It is with extremely heavy hearts that we announce the passing of Buff Templeton, age 64, of Midland, Texas. He departed this earth peacefully on Wednesday, February 26, 2020, in the comfort of his own home surrounded by family. Buff was born on May 16, 1955 in Roswell, NM to Robert and Barbara Templeton. He spent a lot of his childhood in New Mexico before moving to Dell City, Texas around 1968. Soon after moving to town, he met a pretty young lady by the name of Shelly. They quickly became friends and the fun couple was voted class favorites in the 8 th Grade. While growing up in the small West Texas community, Buff worked on his family’s farm and stayed busy with school activities and sports. It has been said that he was one heck of a football player. Through the years, Buff and Shelly became best friends and high school sweethearts. In 1978, Buff married his best friend and true love of his life. Together they raised their four children on a farm in Dell City, Texas. Through the good times and the many challenges that come with being a farmer in West Texas, he showed his wife and children the meaning of hard work, sacrifice and love. Buff’s tremendous sense of humor and ability to make people laugh was one of his greatest qualities that will be missed so dearly. He loved to joke, impersonate people and play practical jokes on his wife, kids, grandchildren and friends. His laugh was so unique and genuine that he could make others laugh until they cried, just by simply hearing him laugh. Buff touched so many lives in a positive way. Those that truly knew him would say he was a fun, honest and humble man that loved his family more than anything on earth. He truly lived each day to the fullest and taught us all to not sweat the small stuff, but rather to focus on the things that are the most important. “Goodbyes are not forever, Goodbyes are not the end. They simply mean I’ll miss you, until we meet again.” Survivors include his loving wife, Shelly, of Midland, Texas; four children, Pryor Templeton and wife Paige of Glen Rose, Texas, Travis Templeton and wife Liz of Alpine, Texas, Katy Capron and husband Wilson of Christoval, Texas, Mason Templeton and wife Stephanie of Little Rock, Arkansas and eight grandchildren; Rylan Templeton, Carter Templeton, Brynlee Templeton, Macy Capron, Emmy Capron, Kennedy Templeton, Linley Templeton and Layne Templeton. Siblings; sister, Susan Starnes and husband, Gurney Lofland, of Las Cruces, NM and brother, Sid Templeton and wife, Sandra, of Edgewood, Texas. Buff was preceded in death by his parents, Robert and Barbara Templeton. Graveside services only will be held on Saturday, March 7th , 2020 at 1:00 PM, on the family ranch located near Ozona, Texas. NOTE THE LINK BELOW FOR DIRECTIONS https://goo.gl/maps/Vh41CUUarrjCoNEp8?fbclid=IwAR3khFwyvN1QdxDwrnhVVArT3KdA6KEpXhxS7IKsF8rmSlZLOpxvqbAUqBM

It is with extremely heavy hearts that we announce the passing of Buff Templeton, age 64, of Midland, Texas. He departed this earth peacefully on Wednesday, February 26, 2020, in the comfort of his own home surrounded by family. Buff was born... View Obituary & Service Information

The family of William Clyde "Buff" Templeton created this Life Tributes page to make it easy to share your memories.

It is with extremely heavy hearts that we announce the passing...

Send flowers to the Templeton family.