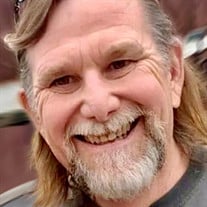 William Bruce Putman January 21, 1962 - February 9, 2021 William Bruce Putman, 59, passed away on February 9, 2021, in Big Lake Texas. A memorial service will be held from 12:00 p.m. to 4:00 p.m. on February 21, 2021, at Yesterdays Bar & Grill in Bryan Texas. Cremation and viewing arrangements are being provided by American Heritage Funeral Home of Odessa Texas. Bruce was born in Uvalde Texas to Faye Smart and Carl Putman. Bruce was the youngest of six boys and was raised in Sabinal Texas. He worked in the natural gas side of the oilfield majority of his life; most recently as a field technician for Pioneer Natural Resources. With his line of work, he was able to call many cities home over the years, including, Sabinal, Austin, Kermit, Caldwell, College Station, and San Angelo Texas to name a few. Bruce’s work ethic was second to none and everyone knew it. In his free time, he enjoyed riding his Harley, taking a drive in his Mercedes, traveling, barbecuing, and going to the movies. Bruce most enjoyed bringing friends and family together. He was a very independent man but would never miss an opportunity to spend time with those he loved. Bruce will certainly be remembered for his kindness and generosity. He never knew a stranger and had an uncanny way of making everyone feel like part of the family. Bruce is preceded in death by his mother, Faye Smart Putman; father, Carl Putman; brothers, Lynn Carroll McNutt and Timothy Carl Putman. Bruce is survived by his daughters Chelsea Rae Putman Dolen and Teela Dawn Putman; son-in-law, Jake Milburn Dolen; brothers, Charles Stephen McNutt, Larry Elbert Putman, and Clarence Alan McNutt; and grandson, Braddox Hoss Putman. Honorary pallbearers include Trump Kornegay, Bobby Reynolds, Jason “Redneck” Frank, Randy Sloan, Jason Sanitz, Hayden McMurray, Charles “Steve” McNutt, and Jake Dolen. Memorials may be sent to his daughter, Chelsea Dolen at 4001 Faudree Rd. Apt. Q108, Odessa, TX. 79765. Donations can be made in his name to American Foundation for Suicide Prevention. The family of Bruce Putman wishes to extend our sincere thanks to Luis Gonzalez, Milburn Dolen, Kirstein Fino, Jason Seymour, Amanda Wiese, Casandra Patranella, Samantha Cowden, Erin Boeker, Jason Sanitz, and his team of people helping cook. We have had a huge number of people reach out and donate towards making this memorial the biggest, best way to honor Bruce. If we have missed listing anyone's name due to time constraints for printing, please accept my apologies and know you are not forgotten or unappreciated.

The family of William Bruce Putman created this Life Tributes page to make it easy to share your memories.

Send flowers to the Putman family.