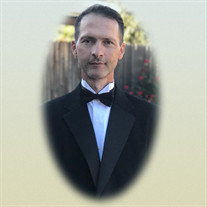 William Michael “Mike” Hopper, of Midland, went to be with his Lord and Savior on Wednesday, September 25th, 2019, with his family by his side. Mike was born on July 20th, 1973 in Midland, Texas to Donald Edward Hopper and Sheila Marie LeMay Hopper. A lifelong resident of Midland, Mike was a graduate of Lee High School and a member of The Mighty Lee Rebel Band drumline. After high school, he attended and graduated from the University of North Texas in December of 1996. He met the love of his life, Angela Oaks Hopper and they were married in Dallas, Texas on February 21st, 1998. They were blessed with two beautiful daughters, Kylie Renee and Kinsey Rae Hopper. He was the owner of Alpha Advertising and Printing and also worked as a pharmaceutical representative. During his free time, he enjoyed coaching his daughters in softball, attending Texas Tech and Lee Rebel football games, and spending time with his family. Mike was proud of his daughters’ excellence in both school and musical activities and always enjoyed supporting them in everything they did. Mike is preceded in death by his parents, Don and Sheila Hopper; his grandparents, Frank Kubica, Hobby and Carrie LeMay; and his niece Carrie Gutierrez. He is survived by his loving wife Angela, daughters Kylie and Kinsey, sister Tressa Gutierrez and her children with Mitchell Gutierrez, Alexander and his wife Xenia, and their children Bella and Xander, Allison Gutierrez and Brandon Gutierrez; sister Melissa Chapman and husband Erick and their daughters Ashlyn and Brynn Chapman, grandmother Janice Kubica, Aunt Shellie Dent and husband Hardy, Aunt Nikki Wallace, Uncle Kenneth LeMay, Uncle Gary Hopper. He is also survived by numerous cousins and his father and mother in-law, Walter and Lynette Oaks and brother in law, Justin Oaks. A Celebration of Life will be held at Crestview Baptist Church on Saturday, September 28, 2019 at 11 am. In lieu of flowers, donations can be made to Hospice of Midland.

William Michael &#8220;Mike&#8221; Hopper, of Midland, went to be with his Lord and Savior on Wednesday, September 25th, 2019, with his family by his side. Mike was born on July 20th, 1973 in Midland, Texas to Donald Edward Hopper and Sheila... View Obituary & Service Information

The family of William Michael Hopper created this Life Tributes page to make it easy to share your memories.

William Michael “Mike” Hopper, of Midland, went to be with his...

Send flowers to the Hopper family.