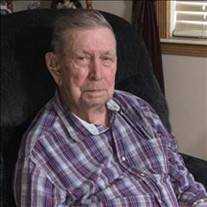 Udell (Slim), 87, of Odessa, Texas passed away on November 26, 2020. He was born May 26, 1933 to Henry Jolly Watts and Edith Fern Baxter in Speedwill, Missouri. He grew up in Lucas, Arkansas living with his mom and with his beloved grandparents, William and Mary Ann Baxter. When he was fifteen his Mother married George Levinson Thames and they moved to Bay City, Texas. In 1949 his baby Sister, Donna, was born from this marriage. He met Dorothy Lee Fox in 1949 and they married on February 16, 1952 in Bay City, Texas. She was the love of his life and they were married for almost 69 years at the time of his death. They had four children, five grandchildren, seven great-grandchildren, and one great-great-grandchild. He loved all of his children and grandchildren with all of his heart. In 2000, he was fortunate to find and meet his half-brothers and sister from his Father, Henry. Although he never met Henry he came to know him through the stories told by his brothers. They had 20 years together with many great memories and he loved them so much. He is preceeded in death by his parents, Henry Jolly Watts, Edith Fern Baxter and George Levinson Thames; his grandparents, William and Mary Ann Baxter; sister, Mildred Wilson; brother, Bill Watts; brother, Johnny Watts; and brother, Ben Watts. He is survived by his wife, Dorothy Watts of Odessa, Texas; son, David Watts and wife Louise of Midland, Texas; daughter, Rita Brake and husband Victor of Lyndale, Texas; Son, Tommy Watts and wife Doloras of Wichita, Kansas; daughter, Rhonda Hicks and husband James of Odessa, Texas; sister, Donna Gola of Cedar Lane, Texas; brother, James (Bud) Watts of Huntersville, NC; brother, Sam Watts and wife Bobbi of Belmont, NC; grandsons, Chad Brake, David Lee Watts, Denton Watts, and Jeremy Hicks; granddaughter, Natasha David; all of his great-grandchildren and great-great-grandchild. A Celebration of Life will be held on December 10, 2020 at 1:00pm at American Heritage Cemetery in Midland, Texas. Funeral arrangements are being handled by American Heritage Funeral Home in Midland, Texas.

Udell (Slim), 87, of Odessa, Texas passed away on November 26, 2020. He was born May 26, 1933 to Henry Jolly Watts and Edith Fern Baxter in Speedwill, Missouri. He grew up in Lucas, Arkansas living with his mom and with his beloved grandparents,... View Obituary & Service Information

The family of Udell Lavern Watts created this Life Tributes page to make it easy to share your memories.

Send flowers to the Watts family.