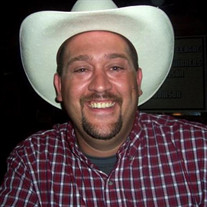 On February 25, 2021, Travis Alton Hatcher was returned to the loving arms of our Father in Heaven. The youngest of two children, Travis was born July 7, 1975 in Odessa, Tx to Alton Curtis Hatcher and Susan Marie Scowden Hatcher. Travis was adored by his big sister Dalena and was the apple of his parents eye. Coming from an Italian background and having a large family made an impact on his life, family meant everything to him. Living in the country, Travis learned hard work, discipline, and most of all, love of family. He was taught at a young age how to fish, how to camp, carpentry skills, as well as tending to numerous types of animals by his dad. His mom passed on her love of sports, teaching him how to bowl at a young age and watching him excel at everything he did. Out of all the traits he received from her, her heart was the most prominent. He learned from her empathy as well as courage, strength but also softness. As he grew into an adult, he kept these values and skills his family instilled into him and through his love and devotion, became a hero to his big sister, Dalena and her daughters, Lauren and Sarah. Even though he was the little brother, he was the one she could always turn to for anything big or small. Travis had a zest for life, held a captive audience with his story telling and never met a stranger. He touched so many lives, even if he never knew it. Travis met his wife, the love of his life, Laci Hatcher, in 2005. What started out as friendship and a bond that was formed with a love of singing karaoke, soon grew into something more. As the time went by, their bond grew stronger, and they knew they were destined to be together. They were soon married after a brief courtship on October 21, 2006. Their relationship was only made better by the fact that they both had 3 boys each from prior relationships and together make the all boy “Brady Bunch”. Forrest Randall, who added a loving wife Krysta Randall and two adorable grandchildren Alba and Soren, Perrin Hatcher, Aric Menzl, Ashton Wilson, Cayden Wilson, and Bryton “Peanut” Hatcher. He loved being a father, reveling in being able to teach all his sons, because there was no such thing as “step” in this family, the things he learned as a boy. He always made sure they were his priority in life and that they knew they were loved. But his love and devotion didn’t end at his immediate family, as he was very involved in the lives of his nieces and nephews and treated them as his own. As the years passed the love of Travis and Laci stayed strong and their lives became the relationship goals of so many people. They had a storybook life. He is survived by his wife, Laci Hatcher; six sons, Forrest Randall and his wife Krysta, Perrin Hatcher, Aric Menzl, Ashton Wilson, Cayden Wilson, and Bryton “Peanut” Hatcher; grandchildren, Alba Randall and Soren Randall; his parents, Alton and Susan Hatcher; sister, Dalena Sellard; mother and father in law, Robert and Joy Loague; brother and sister in law, Justin and Christi Farris; brother and sister in law, Robert and Lucile Payne; aunts, Diane Johnson, Genie McKee, Dena Scowden, and Sarah Jones; nieces Lauren Martinez and her husband Aaron, Sarah Sellard, Shelby Farris and Hannah Payne; Nephews, Braden Parish, Cameron Parish, Jerod Parish, Cabot Parish, and Vaughn Payne. Great nephews; Maddox Martinez and Bronson Parish; as well as many cousins. He is preceded in death by grandparents, Leon Eugene and Eleanor Scowden, Curtis and Elsie Hatcher; Uncles, Mark Hatcher, James Scowden, Dearl Johnson, and Jimmy Jones; cousins, Dana Jones and Dearl Johnson Jr.; grandson Keanu Randall; father in law, Gerald Edwards. Visitation will be held on Monday, March 8, 2021 from 11:00 am – 8:00 pm at American Heritage Funeral Home in Midland, TX. A Celebration of Life will be held on March 9, 2021, 10:00 AM at American Heritage Funeral Home with Johnny Touchstone officiating. Links for Livestreaming the Service: AH Facebook https://bit.ly/ahFacebook AH YouTube https://bit.ly/ahYouTube

On February 25, 2021, Travis Alton Hatcher was returned to the loving arms of our Father in Heaven. The youngest of two children, Travis was born July 7, 1975 in Odessa, Tx to Alton Curtis Hatcher and Susan Marie Scowden Hatcher. Travis was... View Obituary & Service Information

The family of Travis Alton Hatcher created this Life Tributes page to make it easy to share your memories.

Send flowers to the Hatcher family.