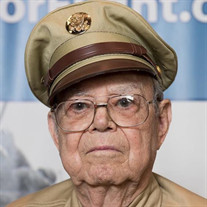 Tharen Howard “Ike” Eicher went to be with our beloved Lord on Thursday April 12, 2018 with a tired heart and he was so ready to be reunited with the love of his life, “Tiny”. Ike was born in Burlington, Colorado on April 23rd, 1925. He graduated from Burlington High School where he served as Jr and Sr class president and fought for the Golden Glove state championship title two years in a row. He was the last surviving member of his graduating class. He volunteered for the armed forces as soon as he turned 18. He was a Ball Turret Gunner on a B-17 and flew 33 missions over Nazi Germany for the United States Army Air Corps during World War II. He was honorably discharged on September 26th, 1945 as a staff sergeant. He was the last surviving member of his flight crew. In 2014, he and his 3 sons got to travel to Washington D.C on the first Permian Basin Honor Flight. He always felt very humble and emotional about the trip. What Is A Veteran? A “Veteran” – whether active duty, discharged, retired, or reserve – is someone who, at one point in his life, wrote a blank check made payable to, “The United States of America”, for an amount of “up to and including his life”. That is honor. And there are way too many people in this country today, who no longer understand that fact. He met the love of his life, Tiny, in 1945 in Roswell, NM, where they raised 6 beautiful children and were married for 68 wonderful years. They moved to Odessa, Tx in 1966 as he was transferred here to open an office for Foundation Investment Company that he had been with for 12 years. Soon after, he went to begin a new chapter of life and opened “Ike’s Texaco”, then to “Ike’s Kar Kare” and lastly, at 74 years old, went on to fulfill a life-long dream of becoming an auctioneer to open “Ike’s Auction House” on Andrews Highway. He was a very faithful, active member of Temple Baptist/Crossroads Fellowship for 52 years. He was known for his Christianity and the way he led his home. He was dearly loved but the love he showed for his children, grandchildren, great and great-great grandchildren was more than evident. His love shines through them and his legacy will live on. “The Impact of One’s Life” by Roy Lessin. When a stone is dropped into a lake, It quickly disappears from sight – But it’s impact leaves behind A series of ripples that broaden And reach across the water. In the same way, The impact of one life lived for Christ, Leaves behind an influence for good That touches the lives of many others. Ike is proceeded in death by his parents, 2 brothers, 1 sister, his beautiful wife, Tiny, his daughter, Kathy Jane, and two grandchildren, Shea and Monica. He is survived by his 3 sons, Mike Eicher and wife Sharon, Rick Eicher and wife Connie, Monte Eicher and fiancé Suzanne: 2 daughters, Dana Eicher-Myers and husband Ronnie and Paula K. Smart, all of Gardendale, TX. He has 69 heirs, including 29 grandchildren, 24 great-grandchildren, and 5 great-great grandchildren. Viewing and visitation will be on Sunday, April 15th, 2018 from 6PM to 8PM at American Heritage Chapel, on 1788 in Midland, TX. Ike’s services will be at Crossroads Fellowship at 11 AM on Monday, April 16th, 2018 in Odessa TX, with David Newton & Jerry Thorpe officiating. Interment will follow at American Heritage Cemetery. All arrangements are entrusted to American Heritage Cemetery and Funeral Home. 4100 N. FM 1788, Midland TX. In lieu of flowers, please send all donations to the Permian Basin Honor Flight.

The family of Tharen "Ike" Howard Eicher created this Life Tributes page to make it easy to share your memories.

Tharen Howard “Ike” Eicher went to be with our beloved Lord on...

Send flowers to the Eicher family.