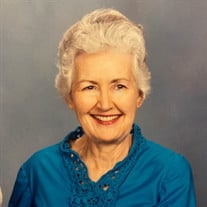 Sherrie Lee Lytton, formally of Mesilla Park, New Mexico, peacefully passed into eternal life on January 31, 2020, in Midland, Texas. She is survived by her son Don Lytton and wife, Kim, of Lubbock, Texas, and her daughter Sharon Roquemore and husband Wendell of Odessa, Texas. She was preceded in death by her husband, Oscar, and her other son Ed Lytton. Sherrie will be missed and remembered also by six grandchildren and their spouses, Jenell and David Sutherland of Marykirk, Scotland, Marshall and Christon Roquemore of Rapid City, South Dakota, Alison and Steven Yeung of Hoboken, New Jersey, Melissa and Micah Donohue of Portales, New Mexico, and Tim and Chris Lytton of Las Cruces, New Mexico. She is also survived by five great-grandchildren. Sherrie was born in Denver, Colorado, on November 24, 1927 and spent her childhood in Pueblo and Beulah, Colorado. After attending Colorado Woman’s College for a couple of years, Sherrie found her way to Las Cruces, New Mexico, where she enrolled in the New Mexico College of Agriculture and Engineering, now known as New Mexico State University. While attending classes at the college she was introduced to a dashing young man, Oscar Lytton, and they were married in 1950 after she graduated with a degree in Home Economics Education. She and Oscar then resided in Mesilla Park for 55 years before moving to Odessa, Texas. During her years in Mesilla Park, Sherrie was a devoted wife and homemaker, ushering her family through tumult of the 1960’s and ‘70’s. As her children grew more independent, she worked for some years as a substitute teacher in the Las Cruces Public School system. She was one of those “subs” whom students dreaded to see as they walked into the classroom, knowing that they faced a class hour of work and order under her no-nonsense gaze. Sherrie loved the home economic “arts” of sewing, and especially baking. Her Christmas baking, fruitcakes in particular, was famous through out the family and was anticipated each year. The baking season started in November in order to get the goodies in the mail to far-flung family members in time to be enjoyed by Christmas. She was always on the prowl for new recipes and the list of Christmas delights grew and grew, with German stollen becoming her ultimate kitchen achievement. After Oscar’s retirement, she retired her baking pans and became a connoisseur of local Mexican food as they enjoyed weekly Mexican food dinners, he was “red” and she was “green”. They often shared these dinners with their granddaughters throughout their years as students at NMSU, memories for which they are grateful, having grown up overseas away from grandparents. After coming to a revitalized faith in Jesus Christ in 1974 Sherrie later became involved in Bethel Bible Fellowship in Las Cruces. At that time many in the group were young and she was one of the fellowship’s “mothers”, from whom many young women gained insight on what was involved in being a wife and mother. She was also a long-time participant in Community Bible Studies. Over the years as her transition to heaven grew closer, her joy in being a child of God became more and more a theme of her conversations and interactions with others. Due to on-going Covid-19 travel and group meeting issues the memorial service that was planned will now be held among family members only at a later date.

Sherrie Lee Lytton, formally of Mesilla Park, New Mexico, peacefully passed into eternal life on January 31, 2020, in Midland, Texas. She is survived by her son Don Lytton and wife, Kim, of Lubbock, Texas, and her daughter Sharon Roquemore and... View Obituary & Service Information

The family of Sherrie L Lytton created this Life Tributes page to make it easy to share your memories.

Send flowers to the Lytton family.