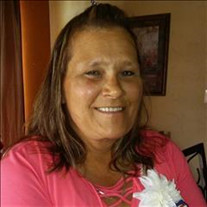 Ronni Ann Wolcott, 59, of Odessa, TX passed away on September 28, 2021 at Odessa Regional Medical Center in Odessa, Texas. Ronni was born on December 7, 1961 to Ronnie Wolcott and Sandra Lou Bunch in Bedford, Indiana. Ronni Ann's heart was made of gold. She had a beautiful smile that would brighten the room and she continues to be a blessing to many. She was an "antique picker" as she would call herself, she enjoyed experiencing new adventures, and holidays were a joy for her. Mom's memory will always be a treasure, she is forever loved, and will be missed until we meet again She is survived by four children, Brigitte Ann Balderas, Trishia Maria Balderas, Sara Balderas (Robert Saenz), and Emigdio Balderas Jr; ten grandchildren, Devin, Adam, Kylie, Mila, Jace, Jackson, Gunner, Jameson, Karla, and Emy; her mother, Sandra Lou (Bunch) Cox; two brothers, Brian Gene Wolcott and Neil Cox Jr.; and father of her children, Emigdio Balderas Sr., and biological father, Ronnie Gene Wolcott; she is also survived by Ceci The Dog. She is preceded in death by her father, Charles Neil Cox "Pappy" and one sister, Kelly Lynn Staggs as well as grandparents, Papaw and Mamaw Bunch. Visitation will be held on Monday, October 4, 2021 from 1:00 PM to 8:00 PM at American Heritage Funeral Home. A Prayer Service will be held from 6:00 - 8:00 PM at American Heritage Funeral Home. Funeral services will be on Tuesday, October 5, 2021, 10:00 AM at American Heritage Funeral Home with Cambri Allison officiating; burial immediately following at American Heritage.

The family of Ronni Ann Wolcott created this Life Tributes page to make it easy to share your memories.

Ronni Ann Wolcott, 59, of Odessa, TX passed away on September...

Send flowers to the Wolcott family.