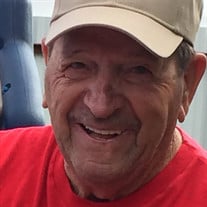 Robert Lee (R.L.) Southerland, age 81, of Midland, Texas, died Thursday July 12, 2018, at home surrounded by his family. He was born February 17, 1937 in Olustee, Oklahoma, the son of Halam and Hattie (Anderson) Southerland. R.L graduated from Olustee High, and it was then he developed a life-long love for baseball. Following graduation from high school, he went on to play in the semi-pro league. Whether playing, coaching, umpiring or simply being a spectator, R.L. did it all.  As a spectator he loved watching his children and grandchildren in any activity they were involved in and taught that first pitch, first golf ball hit to several of them. In Farmington, New Mexico he began his career in the oil field industry with Halliburton where he worked until he accepted a position with Dowell in 1962. After 28 years, he retired from Dowell (now Schlumberger) in 1990. After a brief retirement, he worked for Hughes Services. He transitioned to a sales position for Rooster Spolton with T&C Tank Rentals. He went on to accept a sales position with Keith and Stephen Herriage with Permian Anchors where he worked until his health issues  recently prevented him from continuing his 61 year career in the Oil Industry. R.L’s dedication for the work, and more importantly, the personal and business relationships that he built throughout his career earned him much respect in the industry. R.L. was a member of Northside Baptist Church in Kermit, Texas and after moving attended Grace Christian Fellowship in Odessa, Texas.  He was a faithful servant to his Lord and Savior.  On March 1, 1958 he married Scarlett McMillan of Farmington, New Mexico. Together, they had five children and were married for 23 years. R.L. met the ” love of his life”  Wanda Blair in Midland, Texas where they married in 1982. Wanda had two children of which R.L. accepted like they were his own and they in turn, loved him. First on his priority list was his wife and seven children. R.L. is survived by his wife, sons Robert L. Southerland Jr. (Marie) of Casper, Wyoming; Michael A. Williams (Misty) of Midland, Texas; daughters Kimberly K. Williams of Casper Wyoming; Kathy D. Carpenter of Midland, Texas; Lori A. Southerland of Phoenix, Arizona; Tara Nicole Lee (David) of Fort Worth, Texas; thirteen grandchildren and twenty-one great-grandchildren. Brother Marlin Southerland (Starla) of Sapulpa, Oklahoma. He was preceeded in death by his parents;  five brothers and two sisters and his son, Damon Ray. A celebration of R.L.’s life will be held July 16, 2018 at American Heritage Funeral Home: 4100 North FM 1788 Midland, Texas with visitation at 1:00 pm followed by services at 2:00 pm.  Family graveside services will be held at a later date in Hobbs, New Mexico. R.L.’s passing will forever leave an empty space in the hearts of his family and many friends. Pallbearers are his grandsons Aaron Williams, Austin Williams, Derek Reynolds, Chad Evans, Trey Southerland, Aric Williams, Andre Williams and Justin Wallender.  Honorary Pallbearers are good friends, Stephen Herriage, Marcos Granado and Dr. William (Bill) Carpenter. Officiating the service will be his nephew, Don E. Southerland   But those who wait on the Lord shall renew their strength; they shall mount up with wings like eagles, they shall run and not be weary, they shall walk and not faint. --- Isaiah 40:31

The family of Robert Lee Southerland created this Life Tributes page to make it easy to share your memories.

Send flowers to the Southerland family.