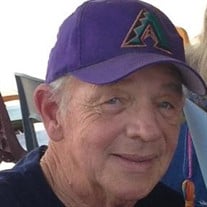 Richard Dow Fleetwood November 8, 1944 – August 16, 2019 Richard Dow Fleetwood, 74, of Midland, was born November 8, 1944 in Seminole, OK to William Dow and Wanda Lee Fleetwood and passed away on August 16, 2019 at his home with his family by his side. Richard graduated from Midland High School in 1962 and enlisted in the U. S. Army where he attended X-ray Technology School at Brooke Army Hospital at Fort Sam Houston in San Antonio, after completing his basic training in Fort Leonard Wood, MO. He was fortunate to train and work in some of the best Army hospitals including Madigan General Hospital in Tacoma, WA and 20th Station Hospital in Nurnberg, Germany where he and his wife, the former Kay Banister of Midland, were able to see many historical places in the world. He started his first volunteer position, coaching youth baseball while in Nurnberg for children of those serving at his military post. He is survived by Kay Fleetwood, his loving wife of 57 years; daughters, Teresa Wright and husband, Richard; and Lisa Graham and husband, Jon; grandchildren, Brooke Smith and husband, Justin, Courtney Watkins, Reagan Wright, Hunter Graham and Gunner Graham; great grandchildren, Cutter Smith, Cooper Smith and Kinslee Watkins; brother, Ricky Joe Fleetwood and wife, Deborah of Edmund, OK; Nephews, Mike Galbraith and wife, Judy of Midland, Tyler Fleetwood and Colton Fleetwood; Nieces, Julie Skinner and husband, Stephen, and Lisa Leonard and husband, William; as well as several great and great, great nieces and nephews. After completing his honorable military service in 1965, Richard took the ARRT registration exam and began his civilian career in Radiologic Technology. He began his career as Director of Radiology in Stroud, OK. Additionally, after hours, he was able to play semi-pro baseball with the Orioles affiliation, while coaching Little League Baseball and serving as Scout Master, teaching his wife to be scorekeeper for the teams and snack provider for the boy scouts camping in their yard. After 4 years in Stroud, he became Director of Radiology in a larger hospital in Duncan, OK. His after hours were spent reviving his high school interest in music promotion by producing and promoting high school dances, providing the bands, and promoting other country music dances and concerts, providing entertainers such as Willie Nelson and Johnny Bush. In about 1973 he returned to Midland and became Director of Radiology at Odessa Women’s and Children’s Hospital, expanding the department and developing the first breast imaging center in West Texas, at which time he also served on the Board of Directors for Odessa College School of Radiology and was a frequent guest instructor. He also continued his music production business through Fleetwood Brothers Production by bringing country stars such as Merle Haggard, George Jones, Johnny Paycheck, Johnny Rodriguez, Conway Twitty, Reba McEntire, Gary Stewart, David Frizzell, Shelley West, Gene Watson, B. J. Thomas and John Conlee to West Texas and Eastern New Mexico events. He was the first promoter early in 1980s to bring George Strait to West Texas and SE New Mexico. He slowed down his music production business in the late 1970s and early 1980s when his daughters began playing fast-pitch softball when he was recruited to become a coach in the MUGS organization. He coached until his younger daughter was out of high school. Additionally, he started the Midland Amateur Boxing program, where he took young boxers all over West Texas and Eastern New Mexico to tournaments, developing friendships in both softball and boxing that have endured for more than 40 years. After most of his students in these two sports had reached young adulthood, he then directed his vast energy and vision to expanding and developing the first self-referral mobile mammography unit in the Nation through a joint venture between Odessa Women’s and Children’s Hospital and TransAmerican Diagnostic Services. After retiring from coaching, he built a horse facility between Midland and Garden City, raising racing quarterhorses. He and his wife were fortunate for several years to enjoy success and have a lot of fun with several horses, including Perfect Liaison who respectfully qualified for many stakes races at Ruidoso Downs and Heritage Place at Remington Park in Oklahoma City, where she qualified to run in several futurity and derby competitions and went on to foal and raise several stakes-placed babies. After retiring from his radiological positions, he sold his horse ranch and returned to coaching fast-pitch softball for his granddaughters. He coached a travel team for his oldest granddaughter and gave private instruction to the others, later traveling to Wall to hold private sessions assisting his son-in-law who was coaching his youngest granddaughter’s team that was later fortunate enough to qualify and compete in the high school state tournament two years straight. After his youngest granddaughter graduated, he officially retired, only giving encouragement to his great grandsons who play baseball, the older playing on both league and select baseball teams. Finally, this left time for him to sit back and relax, so Richard and Kay found their dream vacation home in Cloudcroft, NM, where they have spent a great deal of time in the cool pines for the past few years. A Celebration of His Life and Memorial Service will be held Friday, August 23, 2019 at 2:00 p.m. at Stonegate Fellowship, 6000 W. Wadley Ave. in Midland, TX. Richard requested in lieu of flowers, please make donations to St. Jude Children’s Hospital or Midland Children’s Rehab Center (MCRC). Arrangements are under the direction of American Heritage Funeral Home, 4100 N. FM 1788, Midland, TX 79707.

The family of Richard Dow Fleetwood created this Life Tributes page to make it easy to share your memories.

Send flowers to the Fleetwood family.