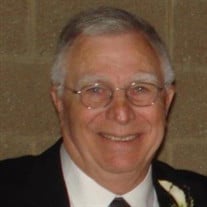 Philip ("Phil" or "Wa") Pugh, 85, of Odessa, died November 24, 2020, at Medical Center Hospital. He was born February 21, 1935 in Alice, Texas. He was a graduate of Central Catholic High School in San Antonio and enlisted in the United States Naval Reserve in February 1953. He was called to active duty and served as a Fire Control Technician aboard USS Conway, DD-507, homeported in Norfolk, Virginia. He married his high school sweetheart, Jana Gail Harris, on October 4, 1956, in San Antonio. He was honorably discharged from the Navy in January 1957. They returned home to San Antonio and he attended San Antonio College. They moved to El Paso in 1959 and he worked for El Paso Products Company while attending Texas Western College (now UTEP). In 1964, he transferred to Odessa with El Paso Products as a Senior Systems Analyst. He left El Paso Products in 1983 and joined Philips Petroleum as a Right-of-Way Manager, where he stayed until his retirement in 2001. He was preceded in death by his wife of 41 years, Jana Gail; his mother and father, Eugene Edward Pugh, Sr and Lula Mae Campbell; and his older brother, Eugene Edward Pugh, Jr. He is survived by his brother, James Michael Pugh and wife Jane of Terrell; his sisters, Frances Dian Krause and husband, Bill Montgomery, of Shavano Park; Mary Ann Hildebrand of Helotes; Margaret Kathleen Ricks and husband Ronald of Fredericksburg; and Teresa Ellen Clarke and husband Brian of Houston. He is also survived by his three children, Vicki Lynn Steel and husband Alan of Odessa, Paul Harris Pugh and fiance' June Collerd of Odessa, and Lori Ann Ellis and husband Patrick of Midland. He was loved by his large family, including 7 grandchildren, 16 great grandchildren, many nieces, nephews and friends. He loved reading and had keen interests in family geneology and Texas history. He was a true patriot and told many stories of being raised in South Texas. Graveside services will be 10:00 a.m., Tuesday, December 1, 2020, at Sunset Memorial Gardens with Fr Joe Barbieri of St. Elizabeth Ann Seton Church in Odessa officiating. Arrangements by American Heritage Funeral Home.

Philip ("Phil" or "Wa") Pugh, 85, of Odessa, died November 24, 2020, at Medical Center Hospital. He was born February 21, 1935 in Alice, Texas. He was a graduate of Central Catholic High School in San Antonio and enlisted in the United States... View Obituary & Service Information

The family of Philip Pugh created this Life Tributes page to make it easy to share your memories.

Send flowers to the Pugh family.