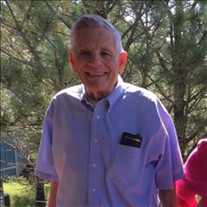 Owen Hugh (Butch) Gibbs Jr., 81, of Odessa, TX, passed away Tuesday, April 13th, 2021. He was born October 17th, 1939, in Hobbs, New Mexico, the son of the late O.H. and Alice Gibbs. He graduated from Hobbs High School in 1958 and attended Hardin Simmons University and New Mexico A&M University. Hugh was proud of being a part of the New Mexico state high school golf championship team in 1957. He married the love of his life, Karen Kay Taylor, on May 8th, 1971 in Santa Fe, New Mexico. Hugh began working in the banking industry in 1960 and was a dedicated and devoted employee until his retirement in 2010. He served in various positions including Branch President and Executive Vice President for several years at various west Texas institutions like Western National Bank, Midland American Bank, and later Commercial State Bank towards the end of his professional career. He made many friends with coworkers and thousands of customers throughout his time in banking. He also served many years as a deacon at the Second Baptist Church, of Odessa. Hugh loved the lord and his life reflected the grace, love and forgiveness of his savior Jesus. He was a devoted family man who loved his wife of 50 years, Karen, more than he loved himself. He put the needs and wants of his three children and five grandchildren before his own. Hugh exemplified honesty, integrity, and empathy throughout his life and in all of his dealings both personally and professionally. His kind heart and gentle nature was obvious to anyone who met him, both friends and casual acquaintances. Although he enjoyed a lively political debate, he always ended it with a genuine smile and a friendly yet firm handshake. He showed respect to everyone, even if they didn't see eye to eye. He was a man of his word who told the truth while looking you straight in the eye and shaking your hand. He is survived by his wife Karen Kay Taylor Gibbs of Odessa; His daughter Lisa Kay Gibbs of Round Rock, Texas; his sons and daughter's in law Jeffrey Dale and Kristi Vardeman Gibbs of Odessa, Texas and Ryan Cache and Raynie Jackson Gibbs of Levelland, TX. Hugh is also survived by his five grandchildren Kelsi Nicole, Carson Brady, Gabriel Thomas, Graham Ryan, and Grayson Owen. Hugh was preceded in death by his parents, Owen Hugh (O.H.) Gibbs, Sr. and Alice Victoria Gibbs of Hobbs, New Mexico. A private family service is pending at this time.

The family of Owen Hugh Gibbs Jr. created this Life Tributes page to make it easy to share your memories.

Send flowers to the Gibbs family.