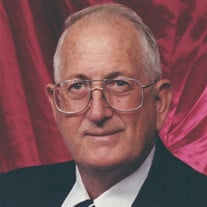 Kenneth Halois Carroll, age 78 left this world and into his Heavenly Father's arms Thursday, April 5, 2018 in Odessa, TX. He was born January 30, 1940 in Malakoff, TX to Milton and Betty Carroll. He was the sixth child if eight children and grew up in Athens, TX. When Kenneth turned seventeen years old, he joined the US Army on February 1, 1957. During his military service he was promoted to Sergeant and was honorably discharged on January 4, 1960. He went on to marry the love of his life, Patricia Carroll, on June 16, 1962. They were married fifty-five and a half years, and to this union were born four children. Kenneth gave from the heart and when he could, he helped people. He enjoyed working with his hands and fixing things. Everything was a project to him. He was a master electrician, HVAC technician and plumber for his own business as Ken's Multi Service for twenty years in Richardson, TX. Referred to as Ken, Kenny, Dad and Papa by his family. He loved his coffee, hot peppers, burgers, watching classic old Westerns, planes, WWI and WWII documentaries and his dear friends at Whataburger. In his earlier years, he enjoyed hiking, much exploring and traveling. He was a strong man with a zeal for life and a caring heart. He will be greatly missed by his family and friends. He leaves behind a legacy that instills in all that knew him a desire to live life, work hard and do right. He is preceded in death by one daughter, Cheree Carroll and grandson, James Byrd. He is survived by his wife, Patricia Carroll; son, Kevin Carroll; daughters, Rebecca Carroll and Esther Byrd; two siblings; eight grandchildren and six great grandchildren. Visitation will be Monday, April 9, 2018 from 6:00 p.m. to 8:00 p.m. at American Heritage Funeral Home, 4100 N FM 1788 in Midland. Funeral service will be held Tuesday, April 10, 2018, 11:00 a.m. at American Heritage Funeral home with Pastor Aaron Shipman officiating. Burial to follow at American Heritage Cemetery.

Kenneth Halois Carroll, age 78 left this world and into his Heavenly Father's arms Thursday, April 5, 2018 in Odessa, TX. He was born January 30, 1940 in Malakoff, TX to Milton and Betty Carroll. He was the sixth child if eight children and... View Obituary & Service Information

The family of Kenneth H. Carroll created this Life Tributes page to make it easy to share your memories.

Kenneth Halois Carroll, age 78 left this world and into his Heavenly...

Send flowers to the Carroll family.