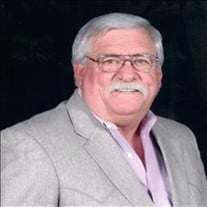 John Russell Oldham, 77, of Odessa, TX passed away Wednesday, December 2, 2020. John Russell Oldham was born in Auburn, Indiana October 10, 1943 to John P. and Jean S. Oldham. Johnny lost his leg in an accident at an early age, but he never let that stop him from accomplishing countless goals in his life. Everything he did in life he did with excellence. After college, he became one of the best phlebotomists around. Always wanting to better himself, he went on to become one of the best welders around this area. Then later owner/partner in multiple businesses. Johnny had varied hobbies and interests. He had his pilots license and was able to fly multiple types of aircraft. He also had a need for speed on the 1/4 mile. Through his years he owned several race cars and loved to build the motors and see how much faster he could make them go. Through drag racing he was able to travel and see the world. At one point in his life he played for several bands including his own, he was the lead singer in some, played the guitar and rocked it on the drums. He loved to golf, fish, trapshoot and most of all, he loved the game of hockey. He was a huge supporter of the Odessa Jackalopes and intrugal part of the Jr. Jacks as a hockey coach in his younger years. Johnny loved to watch his grandson Britton play hockey and hang out with his grand-daughter Karlie. Johnny also loved serving others, from cooking for benefits to supporting fundraisers. He enjoyed spending time at the VA and at the lake with family and friends. Johnny is survived by his son, John Brandon Oldham of Crane, TX, two grandchildren Karlie Jaide Oldham of Lubbock, TX and John Britton Oldham of Odessa, TX. Johnny is preceded in death by a sister Patricia Ann Laughlin and both of his parents. Johnny-O, the world is a lesser place without you in it. Fly high Dad. A Visitation will be held Tuesday, December 8, 2020 from 3:00 pm to 7:00 pm, family will be present from 5:00 pm to 7:00 pm at American Heritage Funeral Home in Midland, TX. A Funeral service will be held Wednesday, December 9, 2020 at 2:00 pm with Graveside to follow at American Heritage Funeral Home and Cemetery in Midland, TX.

The family of John Russell Oldham created this Life Tributes page to make it easy to share your memories.

Send flowers to the Oldham family.