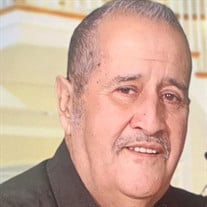 On Tuesday May 12, 2020 Jesus “Jesse” Manuel Leon, loving husband, father and grandfather passed away at the age of 72 in Midland, Texas surrounded by his family. Jesse was born on November 24, 1947 in Artesia, New Mexico to Natividad and Adela Leon. At age 15, Jesse got his first job as a dishwasher and then at age 16, he worked at Rust Nest egg farm. From the age of 17 until retirement, Jesse worked as a carpenter and went on to teach his children his trade. Jesse was a pool shark to all who knew him and dared to challenge him to a friendly game. Jesse enjoyed fishing, Bingo and watching Westerns. He was known for his infectious sense of humor and could have the whole room laughing at his jokes in no time. His life motto was “Yo soy LEON” meaning he was a force to be reckoned with and was the king of the jungle. He lived his life with the mentality of being unbreakable. While he was strong and courageous, he was also a gentle soul that loved spending time with his growing family and his “Boss”, his wife. He will always be remembered as My HoneyBun. Jesse is preceded in death by his parents Natividad and Adela Leon; his brothers Juaquin, Felipe and Carlos Leon and his sister Valentina Hernandez. He is survived by his wife Reina; his 9 children Juana, Linda, Jose, Louis, Reina, Adela, Jesse Jr., Natividad and David and their spouses; Brothers Guillermo and Juan Jose and sisters Socorro, Paula, Juanita, Margarita, Eufemia and Mary. Jesse is also survived by the many blessings he called grandkids and great grandkids (we lost count). A private viewing for immediate family only will be held on Friday May 15, 2020 from 10:00AM till 11:00AM. Regular visitation will begin at 11:00AM till 7:00PM. Rosary will be from 7:00PM to 9:00PM. A burial service will be held on Saturday May 16, 2020 at 11:00AM. All services will take place under the direction of American Heritage Cemetery and Funeral Home at 4100 N FM 1788 in Midland, Texas. A balloon release will follow the burial. Flowers and donations can be sent to American Heritage Funeral Home. Pallbearers: Jose Gavina Jr., Louis Villa, Jesse Leon Jr, Natividad Leon, David Leon, Eric Hernandez and Henry Hernandez. Arrangements by American Heritage Cemetery Funeral Home Crematory.

On Tuesday May 12, 2020 Jesus &#8220;Jesse&#8221; Manuel Leon, loving husband, father and grandfather passed away at the age of 72 in Midland, Texas surrounded by his family. Jesse was born on November 24, 1947 in Artesia, New Mexico to Natividad... View Obituary & Service Information

The family of Jesus "Jesse" Manuel Leon created this Life Tributes page to make it easy to share your memories.

Send flowers to the Leon family.