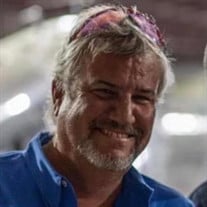 James Richard Kettle made his final departure on September 12, 2020 after an extended illness. He passed in his own time, his own way and of course five o’clock somewhere. He was born on May 30, 1965 to parents Kenneth and Sue Kettle in Odessa and spent most of his adult life in Odessa and Midland except for 2-3 years in Lubbock. James was a graduate of Odessa High School in 1983 and was best known for his outgoing personally and his flashy Baja Volkswagen bug. James knew he was interested in flying as early as the age of 4 when he was watching the Apollo 11 landing two astronauts on the moon for the first time. He has flown many aircraft in this area, but is best known for his skills flying many versions of the King Air. He also held certification in a Citation as well. James’s personality and charm gained him many friends over the years and he was grateful for each and everyone. His second love was cooking. His logo was The Kettle “Open all night”. There was really nothing he could not cook. His specialty was smoking meat, but he was always learning and trying something new. He traveled all over the world, and to 49 of 50 states. He hunted as far as Argentina and shot 1000 birds in one day. He lived life to the fullest and did almost everything his way. He was a true professional in aviation and a trusted pilot by many colleagues. He was most recently employed as Chief Pilot for Oil Dog Pipe Rentals. He was known in the community as Kettle, Stic, Sticman and many more. Other things he loved doing was brewing beer, playing golf, entertaining friends, NASCAR, bird hunting, and cooking out. He was a sanctioned Kansas City Barbecue Judge, member of the NRA, and member of the National Sports Clay Shooting Association. He loved old classic Volkswagen bugs and was the owner of one he called his Tijuana Taxi. He did more in 55 years than most people will do their entire life. He loved life, the places he traveled and the people that made his world a little brighter. He is survived by his mother, Sue Kettle; sister, Cheryl Kettle-Goswick(husband Jim), son Geoff Kettle and daughter, Kathryn Kettle. James had many cousins and cherished friends. He was preceded in death by his dad, Kenneth E. Kettle and his paternal and maternal grandparents. Special thanks to Greg and Trina Gambino for being there anytime of the day or night; also to Homeinstead, Home Hospice and Tricia Bane. Services will be at the CAF hanger 9612 Wright Drive, Midland, Texas at 1100 on Thursday September 17, 2020. Honorary Pall Bearers are Tom Kelly, Ken Burns, Sammy Daulong , Jay Hall, Jay Milam, Greg Gambino, and Lance Sommers. In Lieu of flowers please send donations to Home Hospice, CAF Highsky Wing, or a charity of your choice.

James Richard Kettle made his final departure on September 12, 2020 after an extended illness. He passed in his own time, his own way and of course five o&#8217;clock somewhere. He was born on May 30, 1965 to parents Kenneth and Sue Kettle... View Obituary & Service Information

The family of James Richard Kettle created this Life Tributes page to make it easy to share your memories.

James Richard Kettle made his final departure on September 12,...

Send flowers to the Kettle family.