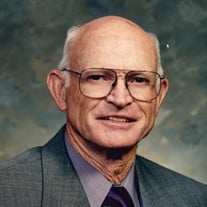 Jack Raymond Skiles, 89, of Langtry and Midland, passed away on August 5, 2020. Wilmuth, the love of his life and wife of 68 years, was at his side. Jack was born March 20, 1931 in Del Rio, Texas to Guy and Vasti (Barnes) Skiles and lived his childhood at Langtry, Texas. Following high school graduation in Del Rio, he attended Sul Ross State University where he obtained a B.S. degree in 1952 and M.A. degree in 1953. He met Wilmuth McCarty at Sul Ross and they married on Sept. 1, 1951 in Mertzon. He began his career as a science teacher and junior high principal at Rankin. He was curator of the Sandhills Museum in Monahans for several years. Jack served as superintendent of schools at Paint Rock and Balmorhea before returning to Langtry in 1968. He was the first manager of the Judge Roy Bean Visitor Center, serving for eighteen years. He returned to school administration as superintendent of Comstock schools from 1987 through 1991. During his years in Langtry he raised sheep and goats, and wrote the book Judge Roy Bean Country, a history of the Langtry area. He served on the board of directors for the Rio Grande Electric Cooperative, Region 15 Education Service Center, and Big Bend Natural History Association. Jack and Wilmuth moved to Midland in 2016. Known widely in West Texas and beyond, he had many friends from all walks of life, always looked forward to spending time with them, and easily made new friends. He enjoyed walking the canyons and hills of the family property at Langtry, whether with family and friends, local townspeople, neighboring ranch people, visiting archeologists and scientists, or in the company of his sheep and goats. He conducted tours of his private history and native American artifact museum for the many who came to visit, most happily for youth and student groups fascinated by the items and his accomplished story-telling. He was an active leader and participant in the Langtry and Comstock communities, churches, and other organizations. Jack and Wilmuth’s interest in people and places near and far led them to travel widely, including to South America, Egypt, Russia, Pacific Islands, Mexico, Alaska, and much of Europe. Jack was passionate about archeology and was recognized by the Texas Historical Commission for preservation of archeological sites on the family ranch. The Shumla Archeological Research & Education Center, located in Comstock, recognized Jack and his family as their 2020 Stewards of the Year. Jack was preceded in death by his parents, aunts and uncles. He is survived by his wife Wilmuth, daughter Peggy Skiles of Big Spring, son Jack Raymond Skiles Jr. of Alpine, and son Russel Skiles and his wife Diane of Lamesa. He was especially proud of his granddaughter Kimberly, and Kimberly’s husband Nathan Vaughan and their daughter, Lilly Rose, of Polokwane, S. Africa; and his grandson Aaron of Lamesa. A memorial service will be scheduled for a later date. Memories and tributes may be written at https://www.gwcoxmemorialfuneralhome.com/obituaries/. Donations in honor of Jack may be made to the nonprofit Shumla Archeological Center at www.shumla.org/donate or to their mailing address, 5706 E. Mockingbird Ln., #115-363, Dallas, TX 75206.

Jack Raymond Skiles, 89, of Langtry and Midland, passed away on August 5, 2020. Wilmuth, the love of his life and wife of 68 years, was at his side. Jack was born March 20, 1931 in Del Rio, Texas to Guy and Vasti (Barnes) Skiles and lived his... View Obituary & Service Information

The family of Jack Raymond Skiles created this Life Tributes page to make it easy to share your memories.

Jack Raymond Skiles, 89, of Langtry and Midland, passed away...

Send flowers to the Skiles family.