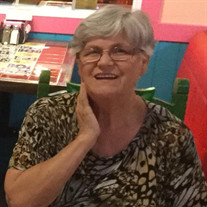 Helen Virginia Gray, of Odessa, Texas, passed away peacefully, in her sleep at home, on Tuesday, May 15, 2018. She was 66 years old. She was born June 27, 1951, in Lebanon, Missouri, to Jesse & Carrie West. Helen was the youngest of 13 siblings. The loss of her Dad at age 2 had a lasting impact on her life, which she spoke of often. All their lives, her Mom taught her & her siblings to love & follow the Lord. Helen was saved in the Assembly of God church at a very young age. She learned sign language as a preteen, so she could help translate the singing & preaching in her church. She taught herself to play the piano as a young teen & had a beautiful singing voice. Helen was full of life, energy & laughter. She loved to tease & prank those around her. She was very nurturing, always taking care of other people. She always put the needs of others ahead of her own, giving generously to anyone who had a need. At the time of her death, Helen had been the office manager at Rodney Hurt Insurance Services for 24 years. She was also the Children's Church Leader & Women's Ministries President at her beloved church, Victory Temple. She had taught Sunday School & Children's Church for over 50 years. She cherished all the kids she taught & claimed them as her own. She spent each Sunday afternoon with a group of friends, singing to nursing home residents. She lit up the room with her smile & laughter. She especially loved being "Gram" to Lea & Emilee. Her death was sudden & unexpected, leaving no time for goodbyes, but we know we'll be reunited with her in Heaven! She loved our Heavenly Father with all her heart & was a great example of what God's servant should be. After graduating from Lebanon Senior High School, Helen married Miles Wayne Gray on September 26, 1969. After Miles served in the U.S. Navy, they lived in San Antonio. Odessa became their home in 1977, where they raised their family, & Helen became very busy serving the Lord & others. Helen was preceded in death by her parents - Jesse & Carrie West & her siblings - Bertha Roberts, Louise Gerard, Buck West, Cecil West, Charles West, & Terry Ann West, at only 6 weeks old (twin sister to Jerry). She was also preceded in death by her parents-in-law - Elmer & Katheryn Gray, & her special furbaby - Abby. Left to cherish her memory are her husband of almost 49 years - Miles Gray, of Odessa, her son & daughter-in-law - Daniel Lee & Mary Lou Gray, 2 grandchildren - Lea Marie Gray & Emilee Katheryn Gray, all of Glen Lyon, Pennsylvania, her son - David Lee Gray of Odessa, 2 furbabies - Charlie & Bailey, her sister - Violet Maynard of Lebanon, Missouri, brother & sister-in-law - Jesse & Martha West of Sherman, Texas, brother - Roy West of Lebanon, Missouri, brother & sister-in-law - Jim & Mary West of Batesville, Arkansas, sister - Bonnie Bohannon of Lynchburg, Missouri, brother & sister-in-law - Jerry & Janice West of McKinney, Texas, & numerous nephews & nieces. Also surviving her are Miles' siblings & their spouses - Janice & Jerry West of McKinney, Texas, Paula & Bruce Bartovick of Tulsa, Oklahoma, Denise & Chuck Vanzant of Plano, Texas, & Eric & Sandra Gray of San Francisco, California. Memorial service is scheduled for Saturday, June 16, 2018, at 2:00 pm. Her dear friend & Pastor, Aaron Chavez will be officiating at Victory Temple Church, located at 509 N. FM 1936, Odessa, Texas. Condolences may be posted at www.thehealingstartshere.com

Helen Virginia Gray, of Odessa, Texas, passed away peacefully, in her sleep at home, on Tuesday, May 15, 2018. She was 66 years old. She was born June 27, 1951, in Lebanon, Missouri, to Jesse & Carrie West. Helen was the youngest of 13 siblings.... View Obituary & Service Information

The family of Helen Virginia Gray created this Life Tributes page to make it easy to share your memories.

Send flowers to the Gray family.