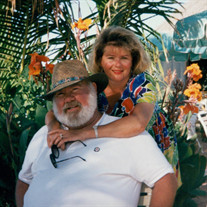 Odessa lost a classic May 13, 2018. Harlan Glenn Scott (Harlan Darlin’) age 81 of Gardendale passed leaving his wife Linda who he shared 22 years of marriage, love and friendship. He is also survived by his brother Eddie, Aunt Rama and many other aunts, uncles, nephews, nieces, cousins and devoted friends who routinely received texts from him in the early hours. He is preceded in death by his parents Gilbert Harl and Cicley Maynette Scott, his brothers Bobby, Fred and Ronnie, and Aunts and Uncles Clyde, Carl, Orene, James and Kathleen. Harlan graduated from Odessa High in 1956 and enjoyed attending reunions in his red Chevrolet coupe of the same year. He loved classic cars and often could be seen heading to The Market for lunch or cruising around town in his 1941 yellow Lincoln. He met the love of his life Linda at The Market – she noticed him when he ordered a steak for his dog Boss who was waiting in the car. Harlan attended college at Texas Tech and Lamar in Corpus Christi and played football as an offensive center. He tried out for the Houston Oilers and volunteered his services in the United States Marine Corps. His work life began selling newspapers, then tending bar and ironing clothes for his buddies, then SIC Finance and Odessa Motor Company/Pontiac House. Harlan ultimately found his calling leasing/selling mobile homes with over 50 years in the oil industry. He was proud to hold the longest issued retail mobile home license in Texas for Frontier Mobile Housing, and proudly handed out Frontier caps and coins with a big smile and a thumbs up. He enjoyed many things - buying/selling cars, Willie Nelson on the radio, cruising cars with his friends, RV trips, dog shows, shopping at Walmart, watching football and discussing who makes the best tequila. His family, friends, the homeless, and dogs were all well loved and well fed as he enjoyed cooking and providing. Tremendous and heartfelt thanks from his family to those who cared for him and allowed him to keep getting out around town and visiting – Greta, Debbie, Joe and Al. All provided much more than nursing care and transportation for Harlan – they also provided a fun, peaceful and compassionate environment during his transition from this life to the next. Donations may be made in Harlan’s name to your favorite charity or favorite gathering place – please drink a toast to him and share a few stories. He was the life of our party and he will be deeply missed. A celebration of life (Harlan style) to be held at his home June 6th at 6 PM. Food and drink to be served.

Odessa lost a classic May 13, 2018. Harlan Glenn Scott (Harlan Darlin&#8217;) age 81 of Gardendale passed leaving his wife Linda who he shared 22 years of marriage, love and friendship. He is also survived by his brother Eddie, Aunt Rama and... View Obituary & Service Information

The family of Harlan Glenn Scott created this Life Tributes page to make it easy to share your memories.

Send flowers to the Scott family.