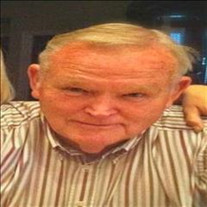 Fred Lee Turner Jr., 79, of Capitan, NM passed away on April 30, 2021 at Medical Center Hospital in Odessa, TX. Fred was born on May 7, 1941 to Fred and Mary Marie (McCormac) Turner in Sapulpa, Oklahoma. He graduated from Ira Highschool in 1959, and married Sandra Jean (Allen) on September 2, 1959, in Ira, Texas. He became a fireman at the age of 19, and served as first responder in that capacity for approximately twenty years. During that time, he built motors for dune buggy's and was a mechanic on the side, eventually going into business for himself. He established West Texas Rentals, owning and operating that for many years. He and his wife also established River of Life Health Food and it is still in business to this day! When it came to being a husband, he was very loving and protective, always making sure his wife was taken care of. They loved traveling to the mountains, calling it God's Country, and they loved it there. He was an amazing father and he was the Ultimate Pops! He was always taking them on adventures through the mountains, looking for bear, or walking through the trails. When his grandkids said they liked to fish, he dug them a huge fishing pond and built a big wooden bridge so they could fish off of it. When they wanted to ride a horse he bought them a pony, (that pony was not very nice, haha!), and when they liked riding dirt bikes, he got his tractor out and built them a track with jumps! He made our childhood an absolute blast, and we will all be forever grateful for his love of being the best Pops there ever was. He is survived by two children, Gina Shaffer (Keith), and Craig Turner; eleven grandchildren; twenty great-grandchildren; and one brother, Phillip Wayne Turner. He is preceded in death by one son, Tal Turner; his parents, Fred Lee Sr. and Mary Marie Turner; and six siblings, Florabell Marie Turner, Mary Alfreda Turner, William David Turner, Norman Dale Turner, Donna Ruth Turner, and Naomi Darlene Turner. Graveside services will be on Saturday, May 8th, 2021 at 10:00 AM at the Hillside Cemetery with Pastor Ben Reid officiating.

Fred Lee Turner Jr., 79, of Capitan, NM passed away on April 30, 2021 at Medical Center Hospital in Odessa, TX. Fred was born on May 7, 1941 to Fred and Mary Marie (McCormac) Turner in Sapulpa, Oklahoma. He graduated from Ira Highschool in... View Obituary & Service Information

The family of Fred Lee Turner, Jr. created this Life Tributes page to make it easy to share your memories.

Send flowers to the Turner family.