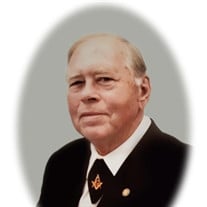 Ellis W. "Bud" "Big" White Entered this world on January 31, 1940 in Nocona, TX to Ellis H. and Opal B. (Reynolds) White and left peacefully on May 11, 2021. And as Paul Harvey would say, "Folks here is the rest of the story!" Bud had/has 2 older siblings, W.T. and Ineta growing up in Nocona. While growing up and living there, he worked at various stores and business's but his favorite was the Nokona Leather Goods factory, making catching equipment and baseball gloves. Dad always made sure that when we played baseball or softball, we used Nokona ball gloves. Like the true Patriot he was, he appreciated that they were American made. This Legacy was even passed to his grandsons who played with Nokonas. Also in this time in Nocona Bud became a member of the Masonic Lodge #753. But, probably the most prolific headlines or scuttle on the street was when he met Elise "Coleen"Deweber. If it was ever said, it was love at first sight. this was it! They were married in 6 weeks in 1961! Boy, you can imagine the talk that went on after that! But, the joke was on those that thought otherwise. Mom carried their first born for 5 years! & in 1966, In Kermit, TX they gave birth to a son, Brian Scott White. Bud & Coleen moved to Odessa, TX in 1962 where he went to work for Bethlehem Steel, thanks to their Brother-in-Law Bill Russell. While they had good intentions, their plans were to stay in West Texas for 2 years and then head on home. As you can see, that worked out well, didn't it? They would soon move to Kermit and make that home for the next 28 years. In 1976, Bud and Coleen gave birth to the most beautiful baby girl, Kellie Nicole (LWD). This was truly a changing point for him as she always had him wrapped around her little finger and the bluff was in! While in Kermit, Bud was active in most everything there was to offer. From Boy Scouts, School Board, Little League, Girls Softball, to the world famous Tumbleweed Chefs, he was knee deep and actively participating. However, his passion was the Masonic Lodge and he never let his commitment or dedication to the Brotherhood falter. He was a 32 degree Master Mason in both the York and Scottish rites, and held every seat in blue lodge more than once. He served twice as the District Deputy Grand Master; once in 1980 and again in 2016. He would later join the Suez Shriners in Midland, TX accompanied by his oldest grandson Deagan White with whom he had taught the craft. Bud & Coleen were very active in the First Baptist Church. Dad sang in the choir, taught Sunday school and helped build the Family Life Center for the church. As you can see, whatever he put his hands on or mind to, you could always count on it being completed and done right. In 1989, Bud was transferred to Midland with Enron. Once again he got to work and began helping others out. He volunteered time with the Lee High Band Boosters and moved his Lodge membership over to Centennial Lodge #1448 from Kermit Lodge #1258. But soon he had membership in every Lodge in Midland and served in each and every one of them! As stated, the Masonic Lodge was more to him than just being a member and paying dues�.He was actively participating and striving to make a good man better. While the Golden Trowel award is highest honor bestowed upon a Master Mason, Bud didn't settle for just 1, no, he put in enough work to have 2!!!! This is something that is voted on by his Brother Masons and the Grand Lodge of Texas. 1989 was a busy year; Bud became a Grandfather and known as "Big". Only because his grandson was too lazy to get out "Big Daddy" like he hoped. Nonetheless, He loved his grandchildren dearly. Big took them fishing (ask a grandson what they learned about fishing), watched them play football, soccer, basketball and baseball/softball, but probably the most fun he had was having Kon Tiki Torch races with them in their backyard while being chased by his vicious Chihuahuas that had their bluff in on Scott. Years later he would then become a Great Grand Father and that was definitely the icing on the cake! He loved being around his family. And Bud loved being around people, telling his stories/jokes. To be honest, I'm not sure if he ever told the same one twice. Either way if you ever had the privilege to sit and visit with him, it was definitely his pleasure to make you laugh. Big is survived by his wife of 60 years Coleen White, Son and Daughter-in-Law Scott & Raye Lynn White, Daughter and Son-in- Law Kellie and Mark Westbrook. He has 5 Grandchildren, Deagan and Jaye Lynn White, Mikaylie and Ross Schwarz, and Dalton and Kanada White and Nolan and Wyatt Westbrook. And the legacy continues with 4 great grandchildren, Rawson, Brigham, and Kross White and Laikyn Schwarz, plus baby boy Schwarz & baby girl White. Viewing will be held this Sunday May 16 from 5:00-8:00 pm @ American Heritage Funeral Home in Midland. Funeral services will be held at Crestview Baptist Church in Midland @ 10:00 am, Monday May 17 th .Masonic grave side service will be following. In lieu of flowers, the family is asking donations to be made to the Shriner's Children's Hospital in memory of Bud White. https://donate.lovetotherescue.org/ShrinersHospitals - Your Gift Helps Patients. And folks, that's the rest of the story!

The family of Ellis Wade White created this Life Tributes page to make it easy to share your memories.

Send flowers to the White family.