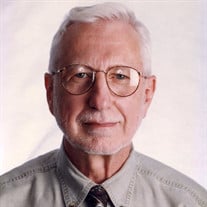 E. Julius Dasch, aged 86, departed this universe on February 14, 2019, at Ashton Medical Lodge in Midland, TX, of complications from interstitial lung disease. Julius was born in Dallas on July 9, 1932, the only son of Ernest J. Dasch Sr., and Jennie Frances McCutcheon Dasch. He graduated from North Dallas High School. He had geology degrees from Sul Ross State University (BS), The University of Texas at Austin (MA), and Yale University (MS, PhD). After a Fulbright Postdoctoral Fellowship at the Australian National University, Canberra, he taught geology and geochemistry at Oregon State University, Corvallis. At Oregon State he was widely known for his high enrollment class, Rocks and Stars, designed for students not studying scientific or technical subjects. Enrollment was limited by the size of the largest auditorium on campus to 748 students. From Oregon State he moved to NASA, working first at the Johnson Space Center, and later at NASA Headquarters where he managed the National Space Grant Program and the NASA Experimental Program to Stimulate Competitive Research (EPSCoR). His 150 research papers and abstracts have primarily been in isotope geochemistry and he was honored to have worked on analysis of rocks from the Apollo 14 and 17 missions. Julius has served as Chairman of the Geological Society of America (Cordilleran Section), President of the Oregon Academy of Science, and was a recipient of the Burlington Northern Faculty Achievement Award. He received the International Astronautical Federation Frank J. Malina Medal for Space Education, The National Science Foundation/Department of the Navy Antarctic Service Medal, the NASA Exceptional Achievement Medal, and the National Space Grant Distinguished Service Award. Julius undertook research in Australia, Greenland, Antarctica, the Solomon Islands, Europe, Asia, Canada, and Mexico, as well as in the U.S. He served on the 1993 Antarctic Search for Meteorites, which recovered more than 800 meteorites, including the then tenth known lunar meteorite. After his retirement from NASA in 2002, Julius returned to Alpine with his wife Pat, where he taught introductory geology at Sul Ross for several years. He continued to advise students, attend student thesis defenses, and give brief talks to the Geology Club until shortly before his death. Julius was a Distinguished Alumnus of both Sul Ross State University and North Dallas High School. His favorite movie, as he always told students at the first class of term, was ‘Dirty Dancing.’ Julius is survived by his wife of 31 years, Pat, nephew Robert A. Powers, great nephew Michael Tchirkow, great nieces Annie Dittoe and Julie Sanchez, and five great-great nieces and nephews. Funeral services will be private. In lieu of flowers, donations may be made to The Julius Dasch Memorial Fund at West Texas National Bank, PO Box 1769, Alpine, TX 79831. This fund will enable local geology student endeavors.

E. Julius Dasch, aged 86, departed this universe on February 14, 2019, at Ashton Medical Lodge in Midland, TX, of complications from interstitial lung disease. Julius was born in Dallas on July 9, 1932, the only son of Ernest J. Dasch Sr., and... View Obituary & Service Information

The family of E. Julius Dasch created this Life Tributes page to make it easy to share your memories.

Send flowers to the Dasch family.