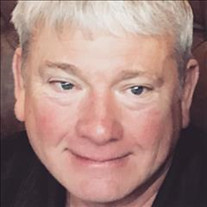 Daniel Vinson Younts, 61, passed away at home on Sunday, January 24, 2021, following a brave battle with cancer. Born June 26, 1959, in Wiesbaden, Germany, he was the third son of the late Donald Eugene and Vivian Arlene Younts. Dan graduated in 1977 from Northeast High School in St. Petersburg, Florida. He was actively involved in the youth group at First Baptist Church of St. Petersburg, where he met the love of his life � his late wife of 32 years, Wendy Miller Younts. Dan and Wendy married on March 24, 1979 at First Baptist Church in Odessa, Texas. Dan joined Wendy's father in running the family business, Basin Welding Supply. Together they raised three children: Daniel, Bonnie, and Christopher Younts. Dan was an adoring husband and devoted father and was considered a trustworthy friend by all who knew him. He never failed to greet his loved ones with a sweet, loving smile and a warm hug. He and Wendy fostered a family culture of hospitality, opening their home to countless visitors, including foreign exchange students and their children's friends in need. He was an avid fan of the Dallas Cowboys, active as a Shriner and Mason, and participated in various sports, hobbies, and activities with his children over the years. He was a natural craftsman, working with his hands in many creative capacities. He will be deeply missed by all who knew him. Dan was preceded in death by his beloved wife, Wendy M. Younts; his parents, Donald E. and Vivian A. Younts; and his elder brother, Donald Eugene Younts II. He is survived by his children: son and daughter-in-law, Daniel Vinson II and Amber Christine Younts; daughter, Bonnie Suzanne Younts; and son, Christopher Bailey Younts; in addition to his brother and sister-in law, David Stuart and Willa Cherese Younts; sister, Nancy Lavonne Younts; and brother Douglas Marcus Younts. A memorial service will be held Friday, February 5, 2021 at 2 p.m. at Northside Baptist Church in Odessa, Texas. Memorial gifts may be made to Northside Baptist Church.

The family of Daniel Vinson Younts created this Life Tributes page to make it easy to share your memories.

Daniel Vinson Younts, 61, passed away at home on Sunday, January...

Send flowers to the Younts family.