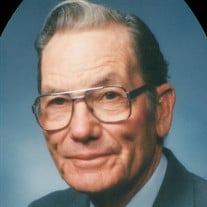 Council Leon Hall passed away on February 18, 2019 in Odessa, Texas at the age of 94. He was born on May 17, 1924 to the late Robert Dorn Hall and Margaret "Maggie" Hall in Hermleigh, Texas. Council married Naomi Jewel Wells on June 12, 1945 and stayed with her for the next 73 years, up until his passing. Council was a retired Building Trades teacher with Odessa High School. He was a World War II Veteran who served in the Navy on the U.S.S. Pensacola. He has been a resident of Odessa since 1946. He loved being outside on his tractor, and working on his home was his hobby. He attended Hardin-Simmons University as well as San Marcos University to get his teaching certificate. He was saved and baptized at Trinity Baptist Church in Odessa. He has been a witness to his family and everyone around him. His greatest feat was to memorize scripture, and he could quote scripture even at the age of 94. When Council came to Odessa, he began building furniture with Kennedy's, then he worked as a framer with J.D. and Fred McElyea. After that, he began building houses. Through the years he also built houses for his family. He would build a house, live in it, then sell it. This was a pattern he repeated over the years. When Council moved to Gardendale, he built three houses; one for his son, one for his daughter, and one for himself and his wife. Throughout the years, Mr. Hall built or helped build Trinity Baptist Church, Greenfield Acres Baptist Church, and First Southern Baptist Church as a gift of service. Council is preceded in death by his parents, Robert and Margaret; sisters Hattie May McElea, Erma Viola Thompson, Annie Elizabeth Beene, Iva Marie Prescott; brothers William Lester Hall and Robert Lee Hall; and grandchildren Arron Dean Hall and Caden James Hall. He is survived by his loving wife, Naomi Jewel Hall; daughter Cynthia Ann Miles and her husband Robert Allen; son Jimmy Dean Hall; grandchildren Wendy Ann Sparks, Cylena Ann Holeman, Clifton Allen Miles, Kayla Stephan and Jeremy Cypert; great-grandchildren Christopher Hall, Cory Armstrong, Bailey Sparkman, McCartney Holeman, Callaghan Miles, Mikaelynn Miles, Joselyn Rose Hall, Brayden Cypert, Bentley Cypert, Kyah Cypert and Ashley Lopez, as well as one great-great grandchild, Hillary Lopez. Council has been an inspiration and witness to his family and friends. He loved his family and considered taking care of his home and family a great joy in his life. He will be greatly missed by all who knew him. A viewing will be held at American Heritage Cemetery/Funeral Home/Crematory on Thursday, February 21 from 6-8pm. A funeral service will be held at Cotton Flat Baptist Church in Midland,Texas on Friday, February 22 at 2pm. Arrangements by American Heritage Cemetery/Funeral Home/Crematory.

Council Leon Hall passed away on February 18, 2019 in Odessa, Texas at the age of 94. He was born on May 17, 1924 to the late Robert Dorn Hall and Margaret "Maggie" Hall in Hermleigh, Texas. Council married Naomi Jewel Wells on June 12, 1945... View Obituary & Service Information

The family of Council Leon Hall created this Life Tributes page to make it easy to share your memories.

Send flowers to the Hall family.