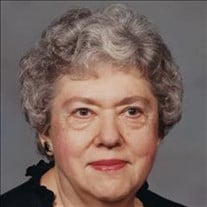 Connie Morgan passed away January 3, 2021 at the age of 94. She was the daughter of Mr. & Mrs. Arthur Blackburn. At the age of one year, she went to live with her Aunt & Uncle Marie & Val Morgan. At the age of nine years, she received Christ as Her Savior while attending a Presbyterian Sunday school. This relationship was the compass guiding her life. She attended only two Seattle schools, graduating from Grover Cleveland Junior-Senior high school in 1943. Her education continued at the University of Washington, ultimately leading to a B.S. degree in nursing. She worked in several Seattle hospitals and in 1949 was appointed clinical instructor, University of Washington School of Nursing. In 1952 she took a position as head nurse in a new Veteran's Administration Hospital. In 1954 she was employed by Seattle King County Health Department and Visiting Nurse Service, which would remain her favorite. December 19, 1953, she married Dale W. Morgan. No children were born to this marriage which ended in 1958. In 1957 she moved to the San Francisco Bay Area where she remained for fifteen years. While there work was completed at University of California, San Francisco leading to a Master of Science in Nursing in 1962. In 1969-1970 work was taken toward certification as a pediatric nurse practitioner. A move to Arkansas was made in January 1972 to take a position at University of Arkansas School of Nursing, teaching Community Health Nursing. While there the class of 1975 awarded her the honor of being named the faculty person making the greatest contribution to their three-year clinical experience. She took a position with Arkansas Department of Health in 1977 in the Division of Maternal and Child Health. She remained there until retirement in 1991. In 1978 work was completed toward taking the pediatric nurse practitioner certification examination. Certification was granted in 1978 by a national board. While at the State Health Department, she served as Nurse Coordinator for the state newborn screening program and also its sudden infant death program. Well child clinics were also part of her assignment and took her to various parts of the state. After retirement she remained in Arkansas until May 2000 at which time she moved to Odessa, TX to be near friends. During retirement in Arkansas, she did volunteer work with Habitat for Humanity, Shepherd's Center of Little Rock, her church and the AIDS care team it sponsored. She was also active in her local community organization and participated in the development of its neighborhood action plan. For five years she was Parish Nurse at St. Luke United Methodist Church. After moving to Texas, she was active at Parks Village Retirement Center serving in several ways and also at her church, Asbury United Methodist. She is survived by many cousins and by two sisters, Terri Freshour of Escalon, CA and Gloria Morton of Odessa, TX who have been like daughters. A memorial service to celebrate Connie's life will be held, Thursday January 7, 2021, at 2:00 p.m. at New Life Church, 7184 Club Drive, Odessa, Texas. The service is under the direction of American Heritage Funeral Home, with Tim Halstead officiating. Donations may be made in her memory to the University of Washington School of Nursing (Box 357260, Seattle, WA 98195-7260) or Habitat for Humanity. Connie spent the last years of her life at The Courtyards Assisted Living Community. A special thank you goes to Becky, Rosie and Marissa of Star Hospice. They were extremely patient with Connie. Due to Covid, the family, New Life Church and the funeral home are practicing social distancing as well as wearing a mask during the Memorial Service. Masks will be required during this service at all times. We appreciate your cooperation.

Connie Morgan passed away January 3, 2021 at the age of 94. She was the daughter of Mr. & Mrs. Arthur Blackburn. At the age of one year, she went to live with her Aunt & Uncle Marie & Val Morgan. At the age of nine years, she received Christ... View Obituary & Service Information

The family of Constance Gloria Morgan created this Life Tributes page to make it easy to share your memories.

Send flowers to the Morgan family.