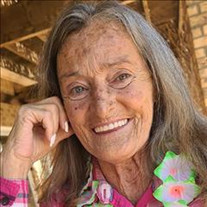 In the stillness of the night, early Monday, December 27th, 2021, Christine "Chris" Shuck canceled her subscription to "Earth". She went like anyone would love to go, peacefully, outside and under the stars. She died of health complications. She almost made it to her 64th Birthday, which is December 31st, 2021. She was born in Gary, Indiana on the last day of 1957 to John and Iota Byrom; the only girl of 4 kiddos. Christine went by Chris (she would always say that you can call her Christine if you are mad.). She was known by many as the "Peppermint Lady" because of her generous heart and when she would go into any business she would hand the workers a soft Bob's Peppermint and tell them, "Thank you for coming to work today." Chris was known to her children's friends as, "Mom". She has shown everyone that she knew how to love someone unconditionally. Chris was preceded by her parents, John and Iota Byrom; her brothers, John Jr., and Tim, and her son, Aaron Jarmon. She will be missed by her kiddos, Garrett Stewart and Royanna Shuck; her grandchild Scarlett Barrera, and brother Danny, and everyone that knew her because to know her was to love her. Chris was a beautiful and caring woman who served in the US Army and State side reserves from 79-81; 81-85. She led a fun and exciting life; she led a full life. Chris worked as a mail courier in the 80s, Medical Field in the 90's (after going back to school as a single mother of 2 kids at the time), and then she became a substitute teacher until her health would not allow it. Chris, aka "Mom", was one of a kind. She was always dancing, singing, smiling, and looking for a fun time! As Hunter S. Thomson suggested, she skidded into her grave, saying, "What a ride!". We will miss you! We love you to the moon and back! A Celebration of Life will be held today, Friday, December 31, 2021, 11:00 AM at American Heritage Funeral Home.

In the stillness of the night, early Monday, December 27th, 2021, Christine "Chris" Shuck canceled her subscription to "Earth". She went like anyone would love to go, peacefully, outside and under the stars. She died of health complications.... View Obituary & Service Information

The family of Christine Shuck created this Life Tributes page to make it easy to share your memories.

Send flowers to the Shuck family.