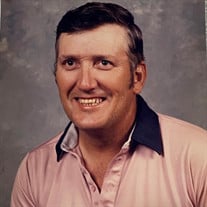 Charles Lannie Simmons passed from this life on Tuesday, March 24,2020 at the age of 74. He was born to Helen Love Henley & Lannie Alexander Simmons on December 23, 1945 in Winfield, Louisiana. Charles grew up in Stamps and Lewisville, Arkansas. He graduated from Lewisville High in 1964, where he lettered in both football and basketball. While visiting Odessa with a friend the following summer, one day he played basketball at Odessa College and afterwards was offered a scholarship to play on the O.C. Basketball team. He accepted and moved to Odessa. In January of 1965, he met Susan Williams and they married on June 28th of the same year. They remained married until his death, just 3 months short of 55 years. Their marriage was blessed with 4 children, 2 daughters by marriage and 4 grandchildren. They attended Parkview Church of Christ for many years as a family and later were members of the Eisenhower Church of Christ. Charles‘ career history included being a brakeman for Rock Island Railroad, a machinist for Kobe Pump Co., a pumper for Adobe Oil & Gas and Fina Oil & Chemical where he worked as a pumper until 1995. Charles loved outdoor activities, especially hunting, fishing, and golf. He took great pride in planting flowers and vegetables in the backyard and taking care of them. He especially enjoyed woodworking and designing crafts. Charles had a heart of gold and would give you the shirt off his back if he could. He had a big heart for animals and loved his dogs & cats dearly. He couldn’t pass a stray without bringing them home. He also enjoyed playing games with friends especially dominos & cards. Charles was preceded in death by his parents, brothers, Clayton Simmons & David Simmons and nephew, Larry Simmons. He is survived by his wife, Susan Simmons of Odessa, daughter, Teresa Simmons of Spring,TX, sons: Robert Simmons & wife Rosie of Odessa, Kevin Simmons of Odessa, James Simmons & wife, Rebecca of San Angelo, grandsons: Nicholas, Samuel & Matthew Simmons, all of Odessa and granddaughter, Ava Simmons of San Angelo. He is also survived by his brother, James E. Simmons & wife, Brenda of Loxley, AL and his sister, Peggy Daugherty & husband, Jerry of Batesville, AR. Additional survivors include brother-in-law, Bob Williams & wife, Carolyn of Kerrville,TX, sisters-in-law: Caroline Simmons Shipley of New Boston, TX & Debbie Simmons of Stamps, AR., Nephews and Nieces: Robert E. Williams, Dale Williams, Brenda Carmony, JT Simmons, Amy Reynolds, Angie Carris, Beth Driver, Jennifer Price, Carl Daugherty, Daniel Simmons, 33 great-nephews & nieces and 5 great-great nieces & nephews. The family wishes to express their deepest appreciation to all of the doctors, nurses, aides & staff from Hospice of Odessa, Midland Memorial & Medical Center Hospital for the care they gave to Charles.

Charles Lannie Simmons passed from this life on Tuesday, March 24,2020 at the age of 74. He was born to Helen Love Henley & Lannie Alexander Simmons on December 23, 1945 in Winfield, Louisiana. Charles grew up in Stamps and Lewisville, Arkansas.... View Obituary & Service Information

The family of Charles Lannie Simmons created this Life Tributes page to make it easy to share your memories.

Charles Lannie Simmons passed from this life on Tuesday, March...

Send flowers to the Simmons family.