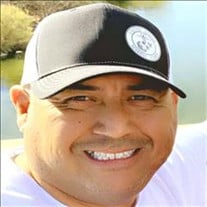 Carlos Oliver Benavidez, 50, of Odessa, TX passed away on February 10, 2021 at Medical Center Hospital in Odessa, Texas. Carlos was born on September 8, 1970 to Carlos and Dominga (Acosta) Benavidez in Monahans, Texas. He married April (Allen) Benavidez on June 1, 2013. Carlos and April renewed their vows and marriage through the Catholic church on September 8, 2019. Carlos was a devoted husband and loving father to five amazing boys. He was a devoted Catholic and knew his place in Heaven was waiting when he arrived. Carlos was and is a marine, once a marine always a marine. He loved with all his heart. His smile lit up any room. He could tell a story that would rival any story teller. Carlos was a friend to anyone at any time, even if he had just met you. He is survived by his spouse April Benavidez of Odessa, TX; and their five sons, Joey Alvarez, Carlos Isaiah Benavidez, Isaac Benavidez, Ivan Benavidez, and Ian Benavidez; his father, Carlos P. Benavidez; three siblings, Maria Banda, Luis A Gavaldon and spouse Geneva, and Lorina Galvadon; nieces, Priscilla Medina, Melissa Jaquez; nephews, Miguel Benavidez, Jovannnie Ibarra, Jordan Gavaldon, nephew/godson Jacob Gavaldon, Jaden Gavaldon; sister in law Casey Duarte and spouse, Noel and their children, Kayden Duarte, Angel Duarte, Christian Duarte, Noah Duarte, and brother in law Travis Allen. He is preceded in death by his mother, Dominga Acosta and grandmother, Aurora Acosta. PLEASE NOTE THE CHANGES: VIEWING will be held on WDNESDAY from 4-8 PM at American Heritage Funeral Home in Midland, TX, if power is restored. Funeral services will be on Thursday, February 18th, 2021 at 2:00 PM at St. Ann's Catholic Church with Father Tim Hayter officiating. Burial immediately following at American Heritage Cemetery.

The family of Carlos Benavidez created this Life Tributes page to make it easy to share your memories.

Carlos Oliver Benavidez, 50, of Odessa, TX passed away on February...

Send flowers to the Benavidez family.