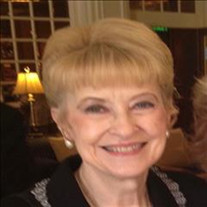 Not sure what to send?

Bette Fran Montgomery Fugit, 85 years old, follower of Jesus was given the gift of eternal life and went to be with her Lord in heaven, on December 29, 2021. Bette was born on September 3, 1936, to John Franklin Irwin Montgomery and Mollie Echols Lisenby Montgomery in Floydada, Texas. Frank and Mollie were part of the farming and ranching community in Matador, Texas and Bette grew up in a wonderful, loving home. After graduating from high school, she attended Southern Methodist University for a semester and then transferred to Texas Tech University in Lubbock and graduated in 1958 with a Bachelor of Business. She met Gerald on a blind date while at SMU and they married on February 14, 1959, in Matador and honeymooned in Santa Fe, New Mexico. They had one daughter, Deborah Susan who was the light of her life and her best friend. Bette was a small-town girl who became a community, civic and business leader in Odessa as well as the State of Texas. She campaigned alongside Gerald when he successfully ran twice for County Judge. She was appointed State Democratic Chairwoman and traveled the State with Governor John Connolly. She chaired the Presidential Museum opening where President and Mrs. Lyndon Johnson were in attendance. She was President of the Odessa Junior League, President of Odessa Study Club and active in numerous other organizations. Bette was the Owner of L'Allegro Fashions for 15 years. L'Allegro which meant "the happy place" was a couture dress shop that was known all over the West Texas area. Bette was known for her sense of "style" and was always dressed "to the nines." Her first love was the Lord. She had a beautiful soprano voice and sang at church, directed the choir, played the piano and organ and was in a praise group. She taught Sunday School and most recently was a leader in Bible Study Fellowship (BSF) for nine plus years. Her love of God's Word was evident in the life that she lived and how others were drawn to her sweet and peaceful spirit. Her favorite Scripture that she held on to was Psalm 46:10 "Be Still and Know I Am God." She is preceded in death by her husband of 61 years, Gerald and is survived by her daughter Deborah. A graveside celebration will be held on Sunday, February 6, 2022, at 2:00 p.m. in Matador, Texas at East Mound Cemetery. In lieu of flowers Deborah asks that donations be made to continue to spread God's Word by providing Bibles through Gideons International, P.O. Box 11227, Odessa, Texas 79760 or to provide food for those in need through the North Texas Food Bank, Senior Programming, 3677 Mapleshade Lane, Plano, Texas 75075

Bette Fran Montgomery Fugit, 85 years old, follower of Jesus was given the gift of eternal life and went to be with her Lord in heaven, on December 29, 2021. Bette was born on September 3, 1936, to John Franklin Irwin Montgomery and Mollie Echols... View Obituary & Service Information

The family of Bette Fran Montgomery Fugit created this Life Tributes page to make it easy to share your memories.