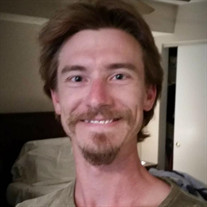 Benjamin Albin Sturgeon, 31, of Odessa, TX died on October 30, 2018, in Ector County. He was born March 16, 1987, to Kent and Barbara Sturgeon in Odessa and was raised in Gardendale, TX. Ben graduated from Permian High School in 2005 and was active in many areas of 4-H throughout his school years. He served in the U.S. Air Force as an Aviation Maintenance Technician, worked as a Journeyman Electrician for Dennard Electric, and had recently been accepted and enrolled into the Physical Therapy Assistant program at Odessa College. He enjoyed working at Dominos pizza while being a full-time student. He had a love for animals, especially his dogs and cat. He loved the outdoors, gardening, rock climbing, motorcycles, and music. He showed his creative side in his art. He built wind chimes and learned to carve bears out of dead trees with a chainsaw because he was always up for a challenge. He loved to learn. He had a heart of gold as big as Texas. He was always willing to help when you asked, and sometimes even when you didn't. He was preceded in death by all four of his grandparents and his father Kent Sturgeon. He is survived by his mother Barbara Sturgeon of Gardendale, his brother PK and wife Michelle, 2 nephews, Bridger and Caelan, and a niece, Alessandra, all of Mico, TX, seven aunts, two uncles, numerous cousins and extended family, and his two dogs and a cat. Funeral services will be held Saturday, November 3, 2018, 2:00 p.m. at American Heritage Funeral Home. In lieu of flowers, memorial contributions may be made to Speaking Up For Those Who Can't of Odessa or the animal rescue of your choice.

Benjamin Albin Sturgeon, 31, of Odessa, TX died on October 30, 2018, in Ector County. He was born March 16, 1987, to Kent and Barbara Sturgeon in Odessa and was raised in Gardendale, TX. Ben graduated from Permian High School in 2005 and was... View Obituary & Service Information

The family of Benjamin Albin Sturgeon created this Life Tributes page to make it easy to share your memories.

Send flowers to the Sturgeon family.