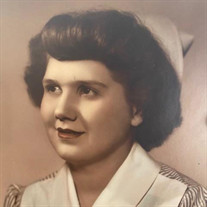 Alice Jane Vales, 92, passed away in Odessa, Texas on May 10, 2020. She was born Alice Jane Klapchar on August 31, 1927 in Latrobe, Pennsylvania to the late Frank and Josephine Klapchar. Alice would later graduate from Latrobe High School in 1945 where her classmates included the late golfer Arnold Palmer and television legend Fred (Mister) Rogers. Alice would then go on to receive her RN degree from Indiana University of Pennsylvania. Alice then moved to Milwaukee, Wisconsin where she would meet the love of her live and future husband George Vales. Alice and George would go on to marry on November 15, 1952, and raise their two kids: Patricia and Gerald. Alice was employed as a Registered Nurse at the VA Hospital of Milwaukee and later at St. Michael’s Hospital of Milwaukee. She was also an adjunct professor at Marquette University and would often serve as a team nurse for the Green Bay Packers and Milwaukee Braves. Her nursing career would span the course of 43 years and she would later retire in 1995. George and Alice would then move on to Las Vegas, Nevada and, later, Odessa, Texas to finish out their remaining years. After retirement, Alice loved spending time with her kids, grandkids, and great-grandkids. She was a wonderful mother, grandmother, and friend to many. Alice was preceded in death by her three sisters, four brothers, and husband George. She is survived by her son Gerald Vales and his wife Suzette of McHenry, Illinois, her daughter Patricia Ares and husband Sam of Odessa, Texas; her grandchildren: Vanessa Dunn and husband Tony of Odessa, Texas; John Confer and his wife Tiffany of McKinney, Texas; Ariel Tratz and husband Zach of Freemont, Wisconsin; Madisen Vales of McHenry, Illinois; along with seven great-grandchildren: Brinlee, Sophie, Sydney, Leighton, Carson, Bradleigh and Blaise. A private memorial is being planned at a later date by the family to celebrate Alice's life.

Alice Jane Vales, 92, passed away in Odessa, Texas on May 10, 2020. She was born Alice Jane Klapchar on August 31, 1927 in Latrobe, Pennsylvania to the late Frank and Josephine Klapchar. Alice would later graduate from Latrobe High School in... View Obituary & Service Information

The family of Alice Jane Vales created this Life Tributes page to make it easy to share your memories.

Send flowers to the Vales family.